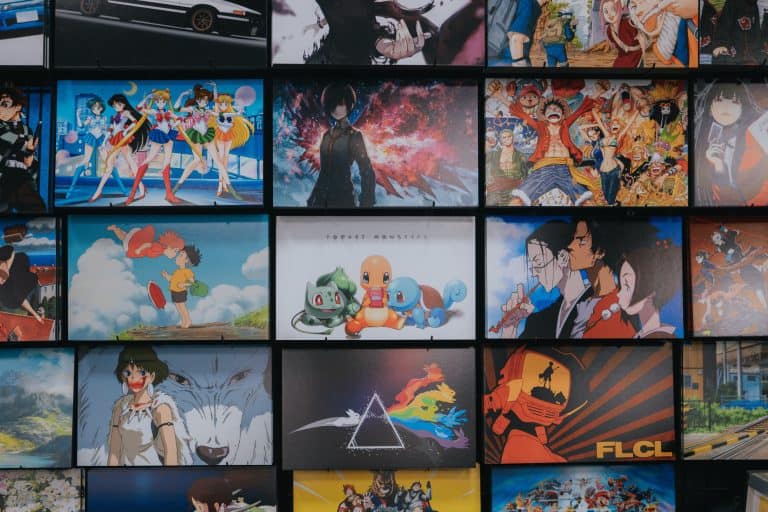 Team Japanese uses affiliate links. That means that if you purchase something through a link on this site, we may earn a commission (at no extra cost to you).
36 shares
LIMITED TIME OFFER!

Are you new to anime? Maybe you’re reminiscing about some of your favorite childhood series?

Whether you came from classics like Naruto or One Piece, or newer favorites like Demon Slayer and Jujutsu Kaisen, there are a lot of Japanese words you commonly hear in anime episodes.

Some famous anime words can be used as interjections in conversations (hontou) or to refer to another person (senpai, kouhai). We’re also going to look at some essential words to describe certain parts of anime culture (like otaku), which you should know if you’re going to be part of the fandom!

Here are 17 Japanese anime words you need to know.

When a character is surprised by something another person has said or done for them, you might hear them use hontou, which translates to ‘Really?’ in English. When used as a noun, hontou would mean ‘reality’ or ‘truth’.

Daijoubu is a very common word in anime! This means ‘it’s okay’ or ‘I’m alright’. When a character messes up, they’ll usually be reassured that it’s all daijoubu… or not? The colloquial, negative form of this is daijoubu janai (大丈夫じゃない), for when everything’s not fine!

In any anime or fandom context, otaku means ‘geek’ or ‘enthusiast’. This word used to carry a negative connotation in the past, but since its use has spread all over the world, the meaning of otaku changed with the popularity of anime.

In present times, otaku is commonly used to refer to fans of anime, manga, and video games. Even fans of trains, airplanes, history, and cars are considered otaku. Conventions are a great way to meet them!

Sometimes shortened to doujin, this word refers to self-published manga created by fans of an existing anime or manga. These kinds of fan-made works are essentially fanfiction; doujinshi feature the same characters from the anime but the story has a different setting or theme!

Doujin (同人) refers to a person who shares the same interests as you, and shi (誌) means ‘document’ or ‘magazine’.

Anime in the isekai genre is gaining popularity nowadays. Isekai refers to works where the main character is transported to another world and must find out how to survive. The kanji 異 means ‘uncommon’ or ‘different’, while sekai (世界) means ‘world’ or ‘universe’.

Ikemen refers to handsome, good-looking, or cool guys. You can find lots of handsome male characters in anime like the members of Iwatobi Swim Club from ‘Free!’, or Levi Ackerman from ‘Attack on Titan’!

Mahou means ‘magic’ or ‘witchcraft’. The kanji ma (魔) means ‘witch’ or ‘evil spirit’, and hou (法) translates to ‘method’ or ‘law’. Classics like ‘Card Captor Sakura’ and ‘Sailor Moon’ are some of the well-known mahou shoujo (magical girl) anime!

Ever encountered anime characters that seem unbeatable? No matter the lengths someone goes through, they just always win? Tensai means ‘genius’ or ‘prodigy’.

The most interesting bit about this word you often see in anime is the kanji ten (天), which means ‘heavens’.

This Japanese interjection means ‘amazing’ or ‘great’. You’ll often hear anime characters say sugoi when they see something cool or impressive, like when ‘Haikyuu’ character Nishinoya Yuu saves the volleyball with his signature ‘rolling thunder’!

A cute anime word to describe everything adorable! Kawaii means ‘cute’ or ‘lovely’. Anything in anime can be considered cute – from chibi to cats, and even magical girl transformations.

Are you into kawaii culture? See this post for even more kawaii Japanese words!

Baka is a famous Japanese word used in anime. It means ‘fool’, ‘idiot’ or ‘stupid’. Characters typically use it to insult or tease someone.

A tsundere is a type of anime character who appears cold outside but has a hidden heart of gold. The word came from the mimetic tsuntsun (ツンツン) which means ‘aloof’ or ‘stuck-up’ and deredere (デレデレ) which means ‘lovestruck’ or ‘flirting’.

There are many other -dere types found in anime, such as yandere (types who have toxic romantic obsessions), dandere (the shy types), and kuudere (the calm and cool types).

Pretty sure this is one of the easiest Japanese anime words to remember, isn’t it? Nani means ‘what’, and many characters use this in moments of surprise or confusion. This is also a popular word used in otaku culture memes.

Doushite is a word that means ‘why’ or ‘how’. It is commonly used in daily conversations. In a more dramatic context, however, during battle scenes or tragic moments in an anime, you might hear a character cry this out in despair.

This word means ‘teacher’ or ‘master’. Sensei also functions as a title for doctors or lawyers. You’ll hear this word most often in anime that feature heroes-in-training and their mentors or anime that are set in schools.

Senpai is used to address someone who is older than you, an upperclassman at school or at work. Sometimes they stand as mentors to the younger ones or kouhai (後輩). In sports anime, the younger students typically look up to their senpai as an inspiration, especially if the older are graduating.

These are Japanese supernatural creatures ranging from ghosts, demons, and mischievous little spirits. Youkai may appear super scary or strange, and some of them carry physical features of animals. These spirits can be kind or dangerous!

Tons of youkai can be found in anime, such as ‘Natsume Yuujinchou’ and ‘Mushi-shi’!

So, these were 17 of the most common Japanese anime words you need to know if you’re a true fan!

If you love anime and manga, learning just a little bit of Japanese can really help you connect with your favorite series and get even more enjoyment from your hobby! Who knows, one day you might even be able to watch your favorite anime without subtitles.

You can learn more popular Japanese words used in anime and daily life for FREE at JapanesePod101. It’s our top recommended Japanese course for beginners. Give it a go!

How many of these anime words did you already know? Do you know any more? Share them in the comments below!