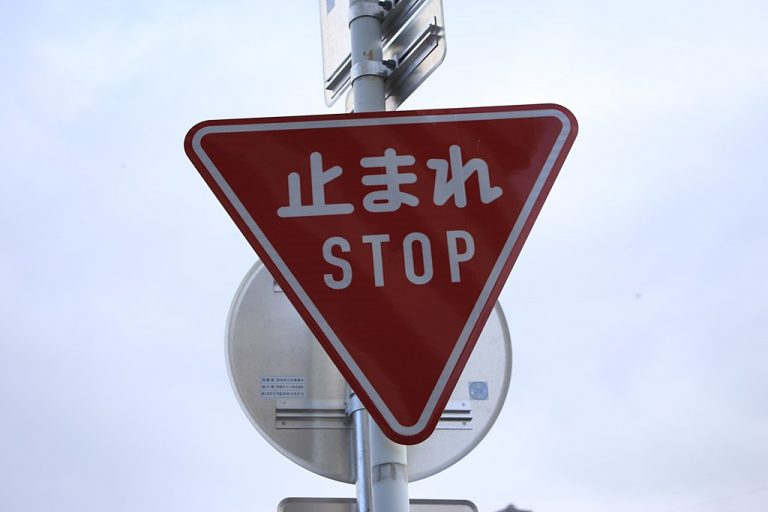 Team Japanese uses affiliate links. That means that if you purchase something through a link on this site, we may earn a commission (at no extra cost to you).
23 shares
LIMITED TIME OFFER!

Where ‘stop’ in English can be used in a variety of situations, in Japanese, it’s quite complicated. Each word for ‘stop’ is dependent on a number of things, like the context, or what is stopping and how.

Words for stop in Japanese are situational. The kanji you use to write it also gives a clue to the situation. It might sound a bit confusing for beginners or even intermediate learners, but we’ll break it down in this post!

Let’s go through them one by one.

Vocabulary words for stop in Japanese

There are three important words for stop that you will most likely encounter. It’s important to understand the difference between these key verbs first. Then we’ll look at how to use them in some key phrases meaning ‘stop’ in Japanese.

To stop, to come to a stop

Tomaru (止まる / とまる) is a verb that means ‘to stop (moving)’, or ‘to come to a stop’. This is perhaps the most common word for stop you may encounter in Japanese.

Note that tomaru is an intransitive verb. This means that there is no direct object affecting the subject. That is to say, something stops by itself, without interference of any external force. Intransitive verbs follow the particle ga (が).

You can write tomaru using various different kanji. Each is pronounced the same way and each means ‘stop’ but they are used in different situations.

To park, to stop, to halt, to prevent

Tomeru (止める / とめる) is the transitive counterpart of tomaru, and this also means ‘to stop’. This time, however, there is a direct object that is stopping the subject. In other words, an external force is stopping something or someone.

Transitive verbs are easily identified by the preceding particle wo (を).

Other meanings for tomeru are ‘to park (a vehicle)’, ‘to prevent’, or ‘to forbid’.

Again, tomeru can be written with different kanji according to the situation. The four variations of tomeru are the same in meaning and kanji as that of tomaru, the only difference being one syllable. Change ma (ま) to me (め) to get the transitive verb.

To stop (doing something), to quit

When you want to stop, quit, or discontinue an activity, use yameru (止める / やめる). This word for ‘stop’ in Japanese is usually written in hiragana.

Yameru can also be written using different kanji depending on the context.

A closely related word that also means ‘to stop’ is yamu (止む / やむ). However, the meaning of yamu leans more towards ‘to let up’ or ‘to be over’, making it an intransitive verb. It’s typically used when talking about the weather, such as the rain or snow stopping.

Now that we know the key verbs meaning ‘stop’, here are some helpful phrases and ways to say stop in Japanese!

Stop it / Quit it

Yamete (止めて / やめて) is a forward, informal way of saying “Stop it!” in Japanese. When used alone, it lacks politeness and is best used around people of the same level or relationship as you.

The -te (～て) or continuative form of yameru is used when asking someone to stop because it is an action that is ongoing.

On the other hand, saying yamete kudasai (やめてください) is more polite, with kudasai (ください) adding a softer tone to say “Please stop it.”

This way of saying ‘stop’ is better for people you are not close with, or those of higher status than you.

Yamero (やめろ) has a more masculine tone to it, and is only used in extreme scenarios. To stop a fight, or forcefully command someone to stop, yamero works like an order. This makes it an informal word.

In anime or drama shows, the hero may command the villain to stop wreaking havoc by yelling out yamero! In real life, though, there aren’t a lot of instances where you can use it.

Another way to command somebody to stop is tomare (止まれ / とまれ). This means “Halt!” or “Stop!” and like yamero, it is exclusively used for dire situations. For example, when the police are chasing after a group of thieves, they say “Tomare!” to force the criminals to stop running away.

Tomare is also used in road signs to make drivers slow down and stop. If you’ve ever been on the road in Japan (or will) you might notice that tomare (止まれ) is written on red, upside-down triangular signs when drivers need to stop at a junction (see the picture at the top of this page). It is also painted on the road in white.

If someone is walking ahead of you, or speaking too fast for you to catch up, you can say chotto matte (ちょっと待って / ちょっとまって) to ask them to slow down or stop for a while.

This phrase is informal, though. To politely ask someone to wait, say chotto matte kudasai (ちょっと待ってください).

Mou ii (もういい) literally means ‘already good’, but a better translation would be ‘that’s enough’. You can say this when you are going to stop doing something because you are already satisfied or tired of it.

For example, you are tired after a long day of work and you have to stop what you are doing to catch the last train home. Or when a colleague is pouring you a drink, and you can only handle so much – you can use mou ii.

Sutoppu (ストップ) is a loanword from English, which makes it very casual when spoken, so it is recommended to use it among people you are close with. This is also usually written in katakana.

Like mou ii, sutoppu can be used to ask someone to stop pouring you a drink at a party, for example. It is a friendly way to say it compared to yamete or tomare. Variety shows often use casual language such as this, so you might hear this word on television as well.

How to say stop in Japanese

Now you know several different ways to say stop in Japanese. Granted, it is more complicated than in English to pick the right word for each situation. But with the key verbs and example phrases in this article you will be able to say ‘stop’ in Japanese naturally!