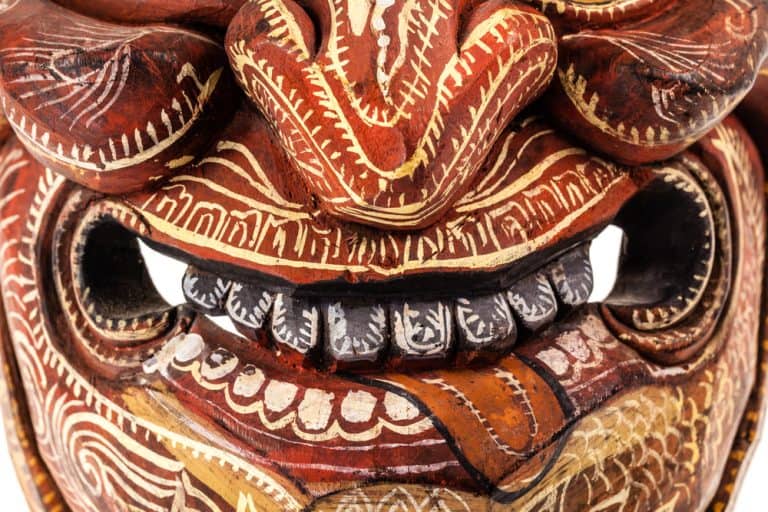 Team Japanese uses affiliate links. That means that if you purchase something through a link on this site, we may earn a commission (at no extra cost to you).
22 shares
LIMITED TIME OFFER!

In the world of Japanese, there are a few words for demons. Japan is famous for its mythology and countless spirit beings, both good and bad. Today we’re going to talk about the ‘bad’ ones!

In Japan, demons are often portrayed as evil, dangerous beings that cause fear or harm to humans. However, there are also demons in Japanese folklore who have been helpers and protectors of people in need.

Many popular manga and anime series in Japan feature demonic characters, such as Naruto and Attack on Titan.

Today, we’re going to take a look at the different categories for ‘demon’ in Japanese – like oni and akuma, as well as some examples of evil spirits in Japanese folklore.

So if you’re interested in learning how to say ‘demon’ in Japanese and what some of them look like, keep reading!

A common Japanese word for devil or demon is oni / 鬼. Oni are a type of evil spirit being known as youkai in Japanese folklore. They are usually depicted as large, ugly, monstrous creatures with horns, fangs, and sharp claws which is why oni are often compared to ‘ogres’ in Western mythology.

Oni can have red or blue skin and aside from being cruel and wicked, they are said to be very strong and have the ability to transform their appearance.

The kanji for oni comes from the Chinese word for ghost, which is ‘kuei‘ (鬼).  It is believed that oni were originally once human beings, but are born when an evil human dies and is sent to one of the several Buddhist hells where they are transformed into an oni.

According to legend, oni live in mountains and forests. They are portrayed in artwork as troll-like creatures who wear loincloths and hold large iron clubs known as kanabo.

Oni are said to enjoy causing mischief and terrorizing humans. In some stories, they murder humans and eat their flesh. However, oni can occasionally be portrayed as helpful beings, such as in the story ‘Naita Aka Oni’.

Regardless of their good or bad intentions, oni are always shown to be fierce, powerful creatures and despite being called a devil or demon, they often appear as symbols of strength and courage in Japanese art.

In Japanese culture, demons referred to as akuma are often seen as negative and fearsome creatures. Akuma gives the impression of demonic possession because the word for an exorcism in Japanese is akuma barai/ 悪魔払い. Akuma can also be used to refer to witches.

In Japanese folklore, there is a class of supernatural beings known as youkai / 妖怪. Youkai can be both good and bad ‘spirits’ and are portrayed in folklore as creatures that take on many different forms.

They can be ghosts, monsters, or even inanimate objects that have come to life. Some youkai are said to be kind to humans, while others are destructive.

The word youkai / 妖怪 comes from two kanji characters: 妖 which can mean ‘attractive’, ‘bewitching’ or ‘calamity’ and 怪 which has the definitions of ‘suspicious’, ‘mystery’ and ‘apparition’.

Interestingly, the original meaning in Chinese of these characters are 妖 (yāo), which means ‘strange’ or ‘mysterious’ and 怪 (guài), which means ‘monster’ or ‘demon’. When you put the Japanese and Chinese meanings together, you get the feeling youkai are not well understood and represent the fear of the unknown.

Youkai has several definitions in the dictionary including ghost, apparition, phantom, spectre, demon, and goblin.

Some famous demons from Japanese folklore

Many demonic creatures take the form of youkai and are common in Japanese folklore. Here are a few that might send a shiver down your spine!

Tsuchigumo are a type of youkai which appear as giant, spider-like creatures with a devilish face, the body of a tiger and the limbs of a spider. They are said to live in forests and mountains.

The word for ‘tarantula’ in Japanese is otsuchigumo (お土蜘蛛) which literally means ‘ground-dwelling spider’ and is named after this mythological creature because of their resemblance.

In the 14th century handscroll Tsuchigumo no soushi (土蜘蛛草紙), this youkai is described as a shape-shifting female spider demon that turned into a servant boy and gave people medicine which was actually its venom.

Yuki Onna is a spirit also considered to be youkai and she goes by many names in different parts of Japan. For example, she may be known as yuki-musume (snow daughter), yukinba (snow hag) or yuki-onago (snow girl).

One story tells of the yuki onna standing in the middle of a snowstorm hugging a child (yukinko) and asking passersby to hug the child as well. The child would get heavier and heavier once hugged until one of them became covered with snow and froze to death.

Gashadokuro are huge skeleton spirits 15 times the size of the average human being.

They are said to arise from the remains of people who died in battle or famine, seeking their victims by roaming in the countryside. If they catch you they will crush you into pieces with their hand or bite your head off. You can hear a ringing in your ears when they’re close by.

Many evil spirits inhabit the mountains, since mountainous terrain makes up almost 70% of Japan’s total land area, and the old mountain hag yamanba (also called yamauba) is one of them.

These witch-like spirits have big, unkempt hair and can be found clothed in old, dirty kimonos. Yamanba act kindly to their victims, appearing as elderly ladies with a genuine care for them before they show their true colours. They have been known to participate in cannibalistic behaviour and even prey on innocent, helpless children.

Some accounts tell of yamauba having a mouth at the top of her head, buried beneath her hair.

This one comes from perhaps the most famous Japanese ghost story of all time, Yotsuya Kaidan, and is the vengeful spirit of a young woman named Oiwa that was betrayed by her husband. The ghost of Oiwa is known as an onryou / 怨霊 (vengeful/wrathful spirit) which are said to be able to return to Earth because of their passion for revenge.

Oiwa’s husband Iyemon is dissatisfied with their lack of money, and leaves Oiwa while she is pregnant to marry a younger, richer woman named Oueme.

However Oueme believes she is not good enough for Iyemon because she thinks she is less beautiful than Oiwa so Iyemon decides to secretly poison Oiwa while they are having dinner. Rather than killing Oiwa, the poison causes Oiwa’s beautiful face to peel and her eyes to come out of her head.

She slips into a coma but when she awakes she remembers nothing about the poison. She has lost her baby and her face is disfigured. In the following weeks, her husband, under pressure from the family of his new wife to be Oueme, desperately tries to get rid of Oiwa and ends up taking her for a walk one night and pushing her off of a cliff where she falls to her death.

She comes back with a vengeance to haunt her husband at his wedding to Oueme by tricking him. When Iyemon lifts the veil of Oueme at the wedding, he sees the disfigured face of Oiwa and violently beheads his bride, only to realise later it was just a ghost and he has in fact killed Oueme.

According to legend, Oiwa still haunts her grave site and to make things even spookier, mysterious disasters and deaths have happened to people who have tried to reproduce her story.

One of the most famous oni in Japanese folklore is Shuten-douji who was considered a leader of demons and one of the top 3 most evil youkai .

His mother was pregnant with him for 2 years and when he was finally born, he was a large baby with a full head of hair, full set of teeth and was able to walk within weeks of birth. As he grew, he began to show superior intelligence and physical size to the rest of the village.

He became arrogant and looked down upon the rest of the village as everyone appeared completely inferior to him even though he was still a child. From even just a few years old, Shuten-douji had an addiction to alcohol. He liked drinking and adults in the village felt it was the only way they could keep him under control so they did not discourage him.

He began to drink so heavily and cause so much mischief in his village that his mother eventually sent him to live in a temple in the mountains. She hoped that it would help discipline him but as he grew, the community there also found it difficult to control him.

One night at a festival in the mountains, Shuten-douji showed up very drunk with an oni mask on his face and tried to scare all of the monks at the temple. When he got back to his room afterwards and tried to remove the mask, he realised it was permanently stuck to his face.

He became embarrassed and escaped the temple to run away and live alone in the wilderness so he wouldn’t have to live with humans again. During this time he became more deformed looking, more bitter and more angry and would kidnap and murder people who came into his path.

In the oldest recount of the story, Shuten-doji is described as being 50 feet tall with a red body, fifteen eyes and a five-horned head. He had one white leg and one black leg, and his arms were blue and yellow.

How to say ‘demon’ in Japanese

So now you know how to say demon in Japanese, and hopefully you have an understanding of the difference between oni, akuma, youkai and some of the other Japanese evil spirits!

From folklore and legend to modern manga, these supernatural beings are a staple in Japanese culture, so it’s well worth learning the Japanese words for demon and spirits.

If you want to delve further into Japanese language and culture, check out our favourite (free!) online Japanese lessons here.