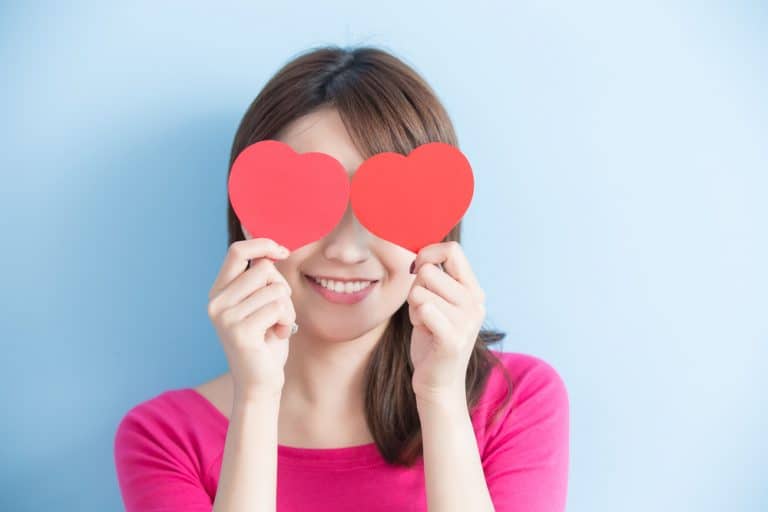 Team Japanese uses affiliate links. That means that if you purchase something through a link on this site, we may earn a commission (at no extra cost to you).
80 shares
LIMITED TIME OFFER!

Every spring, two cute and romantic events are celebrated in Japan: Valentine’s Day (February 14) and White Day (March 14). On Valentine’s Day, the ladies express their love and admiration for the significant males in their life, usually by gifting them chocolate! Men are expected to respond a month later on White Day.

After this fateful exchange, some people fall in love and become couples! The word for ‘girlfriend’ in Japanese is kanojo (彼女 / かのじょ), but there are other ways to say it. Let’s learn them together!

The standard Japanese word for ‘girlfriend’ is kanojo (彼女 / かのじょ). This word can be used by anyone in different settings.

If you are already familiar with basic Japanese, you’ll know this word also means ‘her’. How can you tell them apart? It all comes down to the context.

Kanojo as in ‘girlfriend’ usually doesn’t follow an introduction to who the subject is. If you introduce someone first, then switch to using the pronoun kanojo, it’s usually understood as the pronoun ‘her’.

It’s okay to say watashi no kanojo (私の彼女 / わたしのかのじょ) to be clear that you are speaking about your girlfriend. Native speakers, though, tend to use a person’s name with the appropriate honorific instead of personal pronouns.

Koibito (恋人 / こいびと) is the Japanese word for ‘sweetheart’ or ‘lover’. It consists of the characters for love (恋) and person (人). It can be used for a girlfriend or boyfriend, or even husband or wife.

This term can be used regardless of your significant other’s gender. Unlike kare (彼 / かれ), the word for ‘boyfriend’, and kanojo, koibito doesn’t carry any gendered nuance.

Garufurendo (ガールフレンド) means ‘girlfriend’. Sometimes, common English words are borrowed and used in daily conversations. You might find people on social media and popular culture using this word to refer to their girlfriends.

Another gender-neutral term to refer to your significant other is paatonaa (パートナー). It is another loan word from English.

More and more people are shifting their preference to gender-neutral terms nowadays. Whether between married couples or those who haven’t tied the knot, these words seem more favorable to some who are bothered by some gendered nuances in the Japanese language.

Even good things can come to an end. Ex-girlfriends are referred to as motokanojo (元彼女 / もとかのじょ). Younger people and teenagers typically shorten it to motokano (元カノ).

The word moto (元 / もと) means ‘former’ or ‘past’. Other variations for ‘ex-girlfriend’ are marked by words that have similar meanings of ‘before’:

What do you call your girlfriend in Japanese?

Japanese does not really use terms of endearment like in English (honey, babe etc). The most common way for Japanese guys to call their girlfriend is simply to use their first name, either by itself or with the suffix -chan.

Learn more about Japanese nicknames and terms of endearment here.

Do you need to learn Japanese to talk to your girlfriend and her family? Our recommended language course is JapanesePod101! It even has a 73-lesson pathway called ‘Talking With Your Japanese Partner‘! 😍