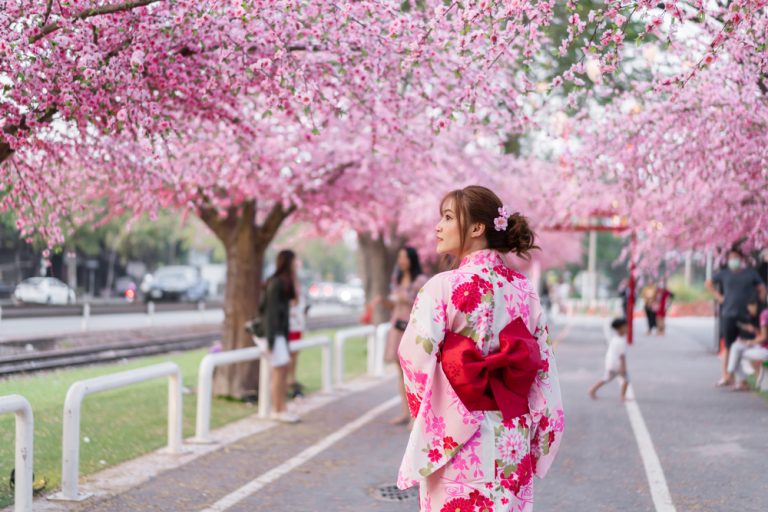 Team Japanese uses affiliate links. That means that if you purchase something through a link on this site, we may earn a commission (at no extra cost to you).
3 shares
LIMITED TIME OFFER!

There’s no doubt that the word ‘Japan’ conjures up the image of cherry blossoms or sakura! Each spring, people flock to hanami or cherry blossom viewing spots to witness the blooming curtains of pink and white, making this the most popular flower in Japan!

But did you know that although the cherry blossoms are iconic, many other kinds of flowers are also popular among the locals? You can only catch some of them during specific seasons, too! Here are some famous Japanese flowers that are culturally important as well.

Hana, the Japanese word for flower

Its kunyomi or Japanese reading is hana (はな), as demonstrated in the following words:

The fuji (藤 / ふじ) or wisteria flower blooms in purple, pink, or white. Wisterias are often associated with nobility because of its typically purple hue.

Did you know that there is a kabuki dance inspired by it? ‘Fuji Musume’ (Wisteria Maiden) is performed by a woman dancing in beautiful kimonos under a flowering wisteria tree. The dancer also switches kimonos four times throughout the dance.

The Ashikaga Flower Park in Tochigi is famous for its 150 year old wisteria tree. It’s so old and impossibly large that the park had to build wooden poles to prevent the branches from sagging!

Ever heard of umeboshi or Japanese pickled plum? Its flowers are actually another famous spring blossom! Ume (梅 / うめ) flowers are found in pale pink or white, and along with cherry blossoms, these also mark the beginning of spring.

Ume is seen as an elegant flower, so it’s not surprising that it is a popular motif choice for kimonos. It also appears in ukiyo-e art, and bonsai enthusiasts might find ume bonsai trees pretty!

The cherry blossom or sakura (桜 / さくら) is one of Japan’s biggest symbols. This beautiful flower typically blooms in pink and white, but depending on the variety, some trees carry yellow, green or dark pink petals!

Hanami or cherry blossom viewing is a popular activity in spring. You and your colleagues or family can find a good spot under a canopy of pink and enjoy the sight while picnicking. A popular spot in Tokyo is along the Meguro River, which is lined with sakura trees. Sakura flavored Kit-Kat bars, cakes, drinks, and many more can be seen around Japan as well.

Tourists and locals alike adore sakura so much that the Japan Meteorological Agency forecasts its blossoming throughout the country!

Because cherry blossoms only bloom for a short time, it’s often used in many art and literary pieces. This represents the fleeting nature of life, encouraging us to embrace each moment while it lasts. Poetic, isn’t it?

A well-known summer flower, himawari (向日葵 / ひまわり) or ‘sunflower’ is said to be a symbol of good fortune! It is recommended as a good gift to go along with marriage proposals.

In Fukushima, where the nuclear disaster took place a few years back, himawari became a symbol of hope. Because sunflowers can help decontaminate soil of radioactive chemicals, they were planted by the locals around the area.

When the Japanese rainy season comes along, ajisai (紫陽花 / あじさい) or hydrangeas bloom! Found in cool shades of purple, blue, green, white, and pink, these blossoms are most beautiful when they are covered in rain droplets.

Ajisai are typically associated with negative messages in hanakotoba, but they can be used when apologizing to someone or saying thank you. A variation called hydrangea serrata’s leaves can also be used to brew tea.

Lotus flower or hasu (蓮 / はす) is an important flower in Buddhism, which is one of the dominant religions in Japan. The lotus grows in muddy water and is a symbol of hope, enlightenment, and purity.

Many temples in Japan have ponds with lotuses floating atop, as well as arches and beams where you can spot intricate lotus motifs and carvings. One popular spot to see hasu is in the Sankei-en Garden in Yokohama.

Farmers might plant irises near the rice fields. Once they bloom, that means it’s time to start planting crops! This is also probably why irises are associated with ‘good news’ or ‘good luck’ in hanakotoba.

Followers of Japanese superstitions might recognize this flower as a symbol of death, but it has a bright side to it too! There are two names for spider lilies:

There is a reason for it being associated with death – it’s because spider lilies are poisonous to humans and animals! People plant them in graveyards to keep wild animals from approaching.

Kiku (菊 / きく) or the chrysanthemum is the symbol of the Japanese imperial family crest (hence, the chrysanthemum throne!). These beauties come in a wide range of colors, making it another popular motif for kimonos.

In the Meiji era, it was illegal to use the imperial crest without permission. Nowadays, the kiku is an important cultural icon that can be seen on the Japanese passport’s cover, in shrines, and as tattoos.

Literally meaning ‘autumn cherry’, akizakura (秋桜 / あきざくら) or cosmos are the stars of autumn in Japan alongside the breathtaking red, orange, and yellow foliage.

In Japan, these flowers mark the beginning of autumn, just like sakura does for spring. Cosmos can come in white, pink, yellow, or orange depending on the variety, and can signify innocence and harmony. Hana no Miyako Park at Lake Yamanaka boasts a lovely view of cosmos and Mt. Fuji! What a treat!

The romantic white, red, and pink tsubaki ( 椿/ つばき) or Japanese camelia, symbolizes perfect love and respect. It was also considered an image of noble death in the Edo period, especially for samurai.

But some people say samurais actually dislike tsubaki because the way it falls to the ground is sudden and whole – like a severed head cleanly lopped off by a sword! However, Japanese camelias are also useful because tea is brewed from its leaves, and kimono fans often choose this flower as a design.

Peonies or botan (牡丹 / ぼたん) is a crowd favorite in Japan as well! It is called the ‘king of flowers’ because it was brought to Japan from China, where it was a popular plant in imperial gardens and noble households.

The winter variety, kan-botan (寒牡丹 / かんぼたん) is artificially cultivated in winter because the cold temperature helps its growth. Farmers also place them in little straw shades to keep frost from forming. It’s so cute to look at!

Botan means bravery in hanakotoba. This is especially true for the kan-botan, because something as beautiful as a peony can survive even the harshest of seasons. Peonies grow from winter until spring.

There you have it! Which one was your favorite flower? And what flower-related activities in Japan do you like? Perhaps hanami or ikebana? Let us know!