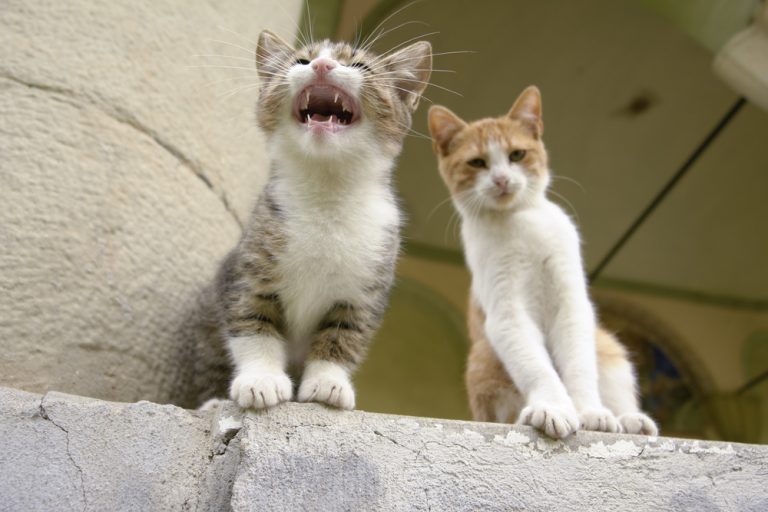 Did you know that your pet cat won’t go ‘meow’ in Japanese? Instead, a cat’s meow would be nyaa-nyaa (ニャーニャー)!

In Japanese, animal sounds are replicated through onomatopoeia. Each sound differs from the biggest and baddest, to the smallest and fluffiest animals. Some don’t even have an English equivalent, making them very unique to Japan.

No matter what breed your pet dog is (Shiba? Corgi? Golden retriever?), the standard sound for a dog’s bark in Japanese is wan-wan (ワンワン).

There is another version, kyan-kyan (キャンキャン). These are equivalent to the ‘woof woof’ sound in English.

The Japanese sound for a cat’s purr is goro-goro (ゴロゴロ), which makes them sound like tiny, fluffy motorcycles!

A rooster or ondori would make the kokekokko (コケコッコー) sound, which sounds like ‘cock-a-doodle-doo’ in English. It also resembles clucking for chickens or niwatori.

A crow or karasu goes kaa-kaa (カーカー) in Japanese. It’s not too different from the ‘caw-caw’ sounds they make in English!

Did you know that white ducks are called ahiru (アヒル) in Japan? Other types of duck, usually wild duck, are called kamo (鴨). Ducks swimming in a lake or cooked for food are usually kamo, while ahiru are domesticated.

Frogs or kaeru make the kero-kero (ケロケロ) sound. If you grew up watching the anime series ‘Sgt. Frog’ / ‘Keroro Gunso’, they got the character Keroro’s name from this very sound! The same goes for the Sanrio frog character Keroppi.

As for bigger frogs or toads, their voice is always lower than that of smaller frogs, so their sound is gero-gero (ゲロゲロ). This resembles croaking rather than ‘ribbit’.

The annoying sound made by flies, mosquitos, bees, or other insects is represented by the buun (ブーン) sound. It’s just like the buzzing noise in English.

Tiny mice or nezumi make the chuu-chuu (チューチュー) sound. The closest translation or equivalent to it would be ‘squeak-squeak’.

Ushi or cows sound the same way in Japanese as they do in English: mō-mō (モーモー), where the ‘o’ is elongated to create the braying sound.

Sheep or hitsuji usually make the ‘baa-baa’ sound, while goats or yagi go ‘meeh’ in English, although they can be interchangeable. In Japanese, both these animals’ bleating sounds more like mē-mē (メーメー).

Again, the ‘e’ is elongated so it should sound just the same as ‘mehh-mehh’.

Pigs go buu-buu (ブーブー) in Japanese, which is a little different from ‘oink’, but sounds a bit closer to the actual sound they make!

Piglets squeal rather than oink, so they make the buhi-buhi (ブヒブヒ) sound instead.

Uma or a horse would go hihiin (ヒヒーン) in place of neighing. This is a high-pitched sound so the second syllable is also elongated to achieve it.

Foxes or kitsune are pretty much special in Japan, especially in folklore! Their sound has no English equivalent, but foxes do a sort of high-pitched bark or howl.

The unique way Japanese describe the sound of foxes is kon-kon (コンコン)!

Wolves or ookami can let out pretty creepy howls! Instead of going ‘awoo!’, in Japanese, the crying sound they make is wao-n (ワオーン).

Tigers and lions roar! In Japanese, their roar sounds like gaō (ガオー).

This sound isn’t limited to big cats only. Gaō is also the sound made by beasts or monsters, like Godzilla! You might encounter some Japanese Godzilla toys that roar like this.

The Japanese onomatopoeia for bears or kuma is guō (グオー). Bears might roar or growl when distressed or threatened, and this low sound is slightly similar to that of the lions/tigers’.

Trumpeting sound (of an elephant)

There is no definite way to write the sound an elephant makes in English, but in Japanese, it’s paoon (パオーン). This is what we hear when elephants blow out or trumpet from their trunks!

Buzzing (of a cicada)

During Japanese summers, the buzzing of cicadas or semi becomes very loud. It’s not summer without them! Their onomatopoeic sound is miin-miin (ミーンミーン).

Let’s review what we learned by watching this kawaii video by Learn Japanese with Tanaka san!

How many sounds did you remember? Which one was your favorite? Leave a comment or reply below!