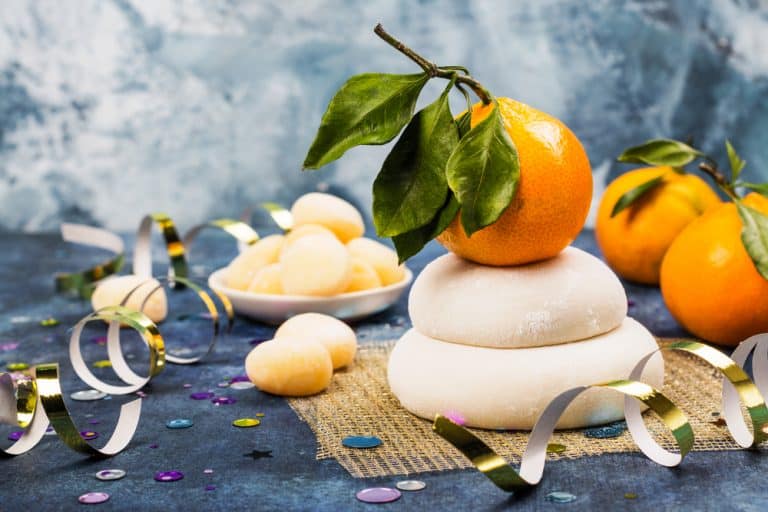 Team Japanese uses affiliate links. That means that if you purchase something through a link on this site, we may earn a commission (at no extra cost to you).
21 shares
LIMITED TIME OFFER!

Ah, New Year! It’s the best time to gather and celebrate all around the world. Japan values the importance of New Year or shōgatsu (正月 / しょうがつ) as much as other countries do.

In fact, Japanese new year celebrations are rich in tradition and festivities!

Families and individuals begin their preparations as early as December, right after Christmas ends. They clean, put up decorations, send out postcards, and gather before New Year’s Eve or ōmisoka (大晦日 / おおみそか).

That’s only the gist of it! There’s so much more to Japanese new year traditions, decorations, and food. Let’s explore these topics one by one.

How is New Year celebrated in Japan?

As the most important holiday in Japan, New Year is a time for families to gather. Because of that, all decorations, food, etc., must be ready before December 31st. Nobody is expected to work or be stressed, because the new year must be welcomed in with happiness and relaxation.

Japanese households undertake a major spring cleaning or oosouji (大掃除 / おおそうじ). This end-of-the-year house cleaning is done in preparation to welcome the gods who will bless each household for the new year. This is also symbolic of the holiday being a ‘fresh start’ or ‘clean slate’.

Be mindful of the time, because procrastinating on cleaning is considered rude to the gods!

The god of grains, Toshigami, is the most celebrated god around this time. In the past, the Japanese prayed to him in order to have a good harvest for the rest of the year. That hasn’t changed much today, as Toshigami is said to bring good luck.

Later in this article, we will learn about the decorations used to welcome Toshigami into Japanese homes.

Most businesses are closed from January 1-3, so people have more time to spend with their families. Some of the traditional games everyone would play together in the past were Japanese badminton (hanetsuki), kite flying (takoage), and card games (karuta).

Since television was popularized, TV stations would broadcast special new year programs. Families can gather and eat delicious food while watching their favorite artists and singers.

On ōmisoka (New Year’s Eve), shrines and temples ring their bells 108 times. This event is called joya no kane (除夜の鐘 / じょやのかね). It is done to purify its listeners of the 108 types of sins or negative energies before the new year begins.

These are postcards that people send before the new year and are expected to be delivered right on January 1st.

Every year, many new designs ranging from cute to cool can be sent to your relatives, friends, or co-workers. They often feature the animals of the Japanese zodiac (2022 is the year of the tiger!). Some people create custom photo cards with pictures of their families.

Japan Post typically holds lotteries with raffle entries printed on the postcards you buy. They raffle off things like electronics or summer trips.

Perhaps the more postcards you get, the higher your chances of winning!

Hatsuhinode literally means ‘first sunrise’ of the new year. On ganjitsu (New Year’s Day), people would get up really early to witness this. It’s especially beautiful when you remember that sunrises indicate the beginning of a new day; in this case, a new year.

The first sunrise is also symbolic as people believe that Toshigami is set to descend and bless households when it happens.

Did you think gift-giving ends on Christmas? In Japan, children and teens receive otoshidama or money wrapped in envelopes from their parents and relatives. Elementary and middle school children receive up to 5,000 yen while high schoolers can get up to 10,000 yen.

Young people may choose to save this money for a rainy day or spend it on their hobbies. Be careful, though, or your new year money might run out in the blink of an eye!

Families and individuals visit the shrine or temple closest to them in order to worship the gods and pray for a prosperous new year.

These visits start on New Year’s Day, which is the busiest time, and continues until January 3rd or so. You can expect crowds and long lines, especially in popular places like Meiji Shrine in Tokyo.

Aside from praying, people can draw sacred lots called omikuji (御神籤 / おみくじ) to find out their fortune for the coming year. Some buy new omamori (お守り / おまもり) or lucky charms and bring their old ones for replacement.

Are you a shopaholic? Love discounts? How about trying your luck at fukubukuro? These are lucky bags sold by merchants in Japan every new year. Fukubukuro consist of different items, usually leftover merchandise that retailers sell at a discounted price.

You won’t know what mystery items you will get: food, jewellery, stationery, clothing, vouchers, and many other things!

Osechi ryōri is an assortment of food, typically arranged in a classic bento box. Each different food is symbolic.

Some foods you can find in osechi are kobumaki (rolled kelp/kombu) which symbolizes happiness, datemaki (rolled omelette and fish paste) that symbolizes scholarship, and shrimp that stands for longevity.

This dish is a mochi (glutinous rice cake) soup. The main ingredient is mochi, and various recipes might add chicken, vegetables, fish cakes, and sometimes, tofu. As one of the new year dishes that families make together, ozouni in seasoning varies per region of Japan. Some families even make and pound their own mochi, especially in the rural areas.

Buckwheat noodles or toshikoshi soba have various toppings and are eaten on new year’s eve or ōmisoka. Another dish that symbolizes longevity!

No New Year would be complete without drinks! This special spiced sake is called otoso. Its history is rooted in the medicinal properties of herbs used in making otoso.

In tradition, Japanese families would drink otoso as a ceremony. The drink would be passed in cups from the youngest to the oldest. This symbolizes the older members sharing the youth of the younger ones.

Though this is no longer commonly practiced as a household ceremony, otoso still remains to be one of the popular Japanese new year drinks.

As the Japanese welcome the new year, they must also prepare for the arrival of Toshigami, the god of grains. He is said to bring prosperity to every home on ganjitsu. Besides oosouji or ‘major house cleaning’, another way to honor Toshigami is by placing decorations around the house.

Here are some of the well-known Japanese new year decorations.

The kadomatsu is made up of three cut bamboo stalks (which symbolize prosperity), pine (longevity), and plum branches (constancy). You might find these displayed at the entrance of the house or anywhere outside.

If you’re living in or visiting an apartment complex with strict regulations on decorations, the kadomatsu is placed indoors, right beside the entrance.

Though the bamboo is the most eye-catching detail, the pine branches are the most important. Matsu can mean ‘Japanese pine tree’ (松), but it also sounds like the verb ‘to wait’ (待つ). When translated in context, this can mean something along the lines of ‘waiting for God’.

These are wreaths that Japanese people hang on the doors of their homes or businesses. Shimekazari are said to attract wealth and repel bad spirits.

Traditional shimekazari are made up of a string of rice straw, strips of paper in a zigzagged pattern, pine leaves, and bitter orange (daidai) or mandarin (mikan). The pine leaves and orange represent longevity and posterity, respectively.

Shimekazari are similar to the ropes tied around trees and torii in shrines. This marks a sacred place in which the gods are welcome.

Lastly, kagami-mochi is made up of two rounded mochi stacked on top of each other, topped with mikan. See the title image at the top of this post for an example!

This is usually placed on the tokonoma (an elevated platform or alcove) or the family kamidana (household shrine). It is said to be symbolic of yin and yang.

In rural areas, kagami-mochi is traditionally handmade by families, but supermarkets now sell plastic versions of this decoration. The mochi is usually eaten after it has been offered to the gods. In this case, the plastic versions are broken so one can eat the mochi inside.

Modern times also allow people to get more creative with their kagami-mochi. Check out this kawaii Disney Tsum-Tsum kagami-mochi unboxing by happypuppytruffles on Youtube!

As you can see, New Year in Japan is a very special time with a lot of uniquely Japanese traditions, decorations and food! If you ever get the chance to spend New Year in Japan, we highly recommend you take it.

Learn more about seasonal celebrations in Japan with these related posts:

2 thoughts on “New Year in Japan: Traditions, Food and Celebrations”