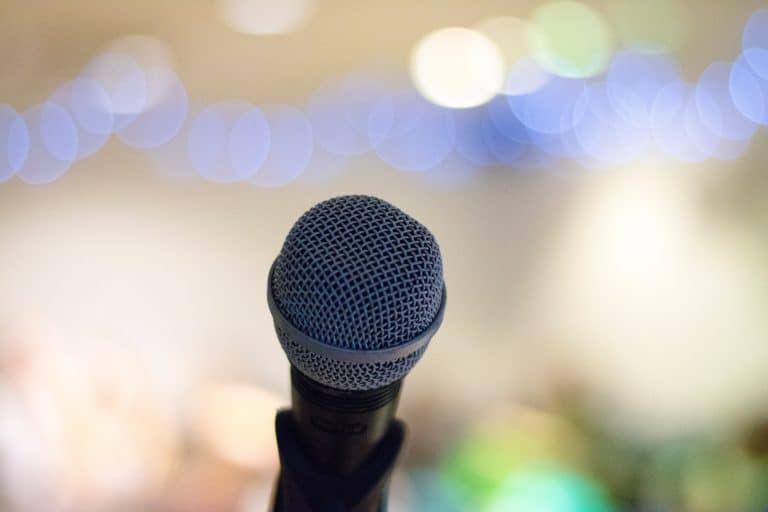 Team Japanese uses affiliate links. That means that if you purchase something through a link on this site, we may earn a commission (at no extra cost to you).
235 shares
LIMITED TIME OFFER!

You’re not the only one!

These five celebs all share one thing: a love for Japan and its language.

Take inspiration from these five celebrities speaking Japanese. If they can do it, you can do it too!

If you’re wondering ‘does Ariana Grande speak Japanese?’ the answer is yes – a little! She was known to be taking Japanese lessons in 2015, and there are several videos of her saying basic Japanese phrases to fans and in interviews. However, Ariana is not fluent in Japanese.

Ariana Grande has long been a big fan of Japan. And in 2015, she announced that she was learning the language! She even posted a snap of her hiragana notebook on Instagram.

my first hiragana writing! working on memorizing the characters. installed the keyboard and everything! only 2 days in but i am in love. あい ☁️ (just beginning! don’t judge ☁️)

Ariana Grande used to take Japanese lessons at the Fuji School in Los Angeles. Her tutor, Ayumi-sensei, shared a picture of them together back in 2015:

She has even been known to tweet in Japanese:

It means: We really want to go back to Japan soon!

Here’s a cute video of Ariana Grande trying out her Japanese in a few different situations. There’s a super funny bit at the end where she teaches Jimmy Fallon to say a few phrases!

In 2019, Ariana Grande got some bad publicity after she got a Japanese tattoo with the wrong choice of kanji.

In a 2019 interview, her Japanese teacher Ayumi Furiya shared that Ariana had stopped her regular Japanese lessons after 2015 as she got more famous and too busy with touring. However, Ayumi-sensei shared that they were still in touch and had occasional in-person lessons when Ariana was available.

Hugh Jackman is not a fluent Japanese speaker, but he knows a few short phrases which he has used much to fans’ delight when visiting Japan for work!

Hugh Jackman has spent quite a bit of time in Japan in the last few years. His 2013 The Wolverine was partly filmed on set in Japan, so it’s not surprising that he picked up a few words during that time.

In May 2017 he landed in Tokyo to promote his latest movie Logan. Talented Jackman posted a video on his Instagram for his Japanese fans, saying ‘watakushi wa nihon de kuru to eiga tame ureshii desu’, which translates as ‘I’m very happy to come to Japan for my movie’.

Hugh actually made some small mistakes in his Japanese, but that’s ok! It just shows that you can still communicate well in a foreign language even if you’re not perfect. And if A-listers aren’t perfect, you don’t have to be either!

In 2019, Hugh posted a video from an airport lounge shortly before jetting off to Japan, which he referred to as ‘one of my favourite places in the world’. He opens the video with the Japanese greeting ohayou gozaimasu (‘good morning’.) His accent and intonation is better than the 2017 video, suggesting perhaps he has be practising his Japanese!

Edward Norton is one of the best Japanese speakers on our list! The Fight Club star studied Japanese at Yale. At that time, his grandfather was living in Osaka where he ran a non-profit called Enterprise Foundation. After graduation, Norton moved to Japan for a few months to work with his grandfather on a project at the Osaka aquarium.

Since moving back to the US and becoming a famous actor, he probably doesn’t use Japanese so much in every day life. But he’s still got it!

He’s apparently given interviews to the Japanese press in near-perfect Japanese, and has even chatted about his favourite karaoke numbers (it’s Billy Joel!).

In this video, he talks about his time in Osaka. His Japanese seems a little bit rusty now, but still seems impressive considering several years have passed since he lived there.

Tom Cruise is well known for his role in The Last Samurai. You can see Tom Cruise speaks Japanese in the movie, but is that really him speaking his lines? The answer is yes! Cruise didn’t speak any Japanese before accepting the role, but he reportedly studied the language in preparation for filming so that he could better pronounce his lines.

Along with the Japanese language, Tom Cruise studied sword fighting and Japanese history to help him get into character.

Cruise also shared that the Japanese cast, such as Hiroyuki Sanada, helped him work on his Japanese pronunciation.

His efforts to learn Japanese obviously paid off: The Last Samurai was a big hit in Japan, grossing an amazing $117 million more in Japan than in the US.

Cruise has apparently visited Japan more than any other Hollywood actor. To thank him for his great relationship with Japan, the country rewarded him with his own national day. Yes, October 6 is officially Tom Cruise Day in Japan!

Why not celebrate next Tom Cruise Day by watching Cruise speak nihongo as Nathan Algren in The Last Samurai:

Steven Seagal is the only western celebrity we found who is truly fluent in Japanese! The actor and martial arts expert lived in Japan for at least 10 years and previously was married to a Japanese woman, Miyako Fujitani.

Seagal moved to Japan at around 20 years old and stayed on to study marital arts. The first martial art he mastered was aikido: he holds a 7th dan black belt in aikido and even became the first foreigner to open an aikido dojo in Japan.  He also gained black belts in karate, judo and kendo. Seagal worked as a martial arts instructor in Japan and America for many years before becoming an actor.

After spending so much of his life dedicated to Japan and Japanese culture, it’s not surprising that he picked up the language along the way. Here’s a video of Seagal speaking Japanese to his Japanese fans:

There you have it! Five top celebrities who speak Japanese… to various levels 😉

Although not most of these celebrities are not fluent in Japanese, and some only speak a few phrases, they are not afraid to use their Japanese when they visit Japan. And it has only made them even more popular in Japan! So don’t be shy about using your Japanese – just go for it!

Feeling inspired? Why not try to outdo them!