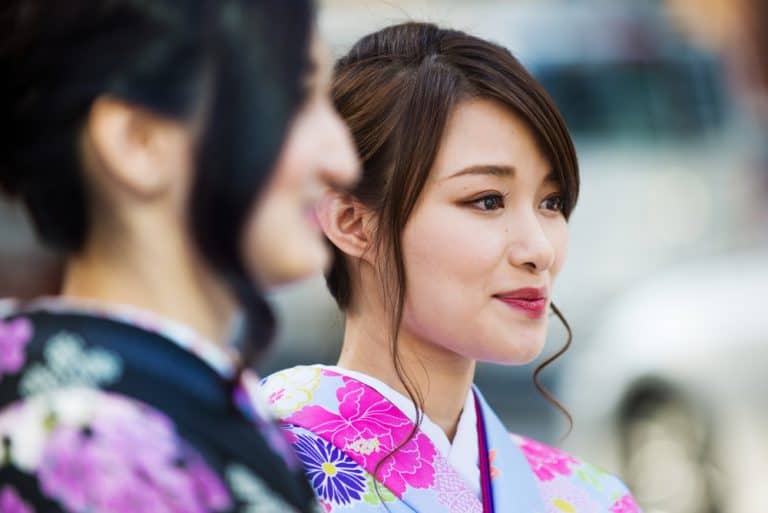 Team Japanese uses affiliate links. That means that if you purchase something through a link on this site, we may earn a commission (at no extra cost to you).
68 shares
LIMITED TIME OFFER!

One of the first words we learn in Japanese is onna / 女 meaning ‘woman/female’, but it can also be one of the least polite ways to refer to women.

When referring to people in Japanese, it’s good to be conscious of the feeling that different words may give to the listener. More appropriate words for ‘woman’ than onna are: josei / 女性 and onna no hito / 女の人.

With all the different levels of politeness in Japanese, it’s easy to miss these subtle nuances between words. They might have the same definition but a totally different feel.

Here we will go over different ways to say ‘woman’ in Japanese and how they are used so you can be sure you’re being respectful when referring to others.

Made up of 3 simple strokes, onna / 女 is a noun that means a woman/female and if you’re learning Japanese, it’s one of the first 100 kanji you learn in the Joyo Kanji.

Even though it is the basic and most widely used word for saying ‘woman’, onna tends to be used in an objective way. For example, when filling out forms you might see a checkbox with the word onna / 女 next to the word otoko / 男, to indicate whether you identify as a female or male.

Onna / 女 has a rough nuance so it isn’t a word you should use to refer to ‘a woman’ or ‘women’ in daily conversation, unlike the next word on our list josei / 女性.

An interesting example of how the nuance of onna differs from josei / 女性 is that often when crime news is reported in Japanese, the word onna / 女 will be used more often for a female suspect while the word josei is more common for a female victim.

Take note that onna also features in vulgar compound words for women like hidoi onna (horrible woman) or ii onna (sexual connotation for a good chick) so you can see where it gets its negative nuance from.

When you want to refer to women in conversation, it’s best to use the next word on our list, josei, instead of onna.

The politically correct and most common way to refer to a woman or women in Japanese is josei / 女性.

Josei is a compound word which combines the kanji for woman (onna), pronounced here with its onyomi reading (jo), and sei / 性 which refers to the biological sex / gender of a person.

You can use the word josei in almost any situation to say ‘woman’ or ‘women’.

A woman / a lady / a female person / female adult

Like josei, onna no hito / 女の人 is a polite and formal way to refer to a ‘woman’ or ‘women’ in conversation.

The use of the no / の particle and the word for person, hito / 人, softens the nuance of the word onna / 女. Onna no hito literally translates to ‘a female person’ but means a woman or female adult.

If you ever want to refer to a woman in Japanese and the only word you can remember is onna, just add no hito to the end of it to make the polite version, onna no hito, and you’ll avoid any awkward moments!

You can use onna no hito in most contexts without sounding rude.

The pronunciation for this one might look a bit funny, but uuman / ウーマン is the Japanese translation of the English word ‘woman’.

When written in katakana, the word woman becomes uuman. Uuman is a modern buzzword to refer to a woman, especially in the context of women’s movements such as:

And of course, is the translation for woman from English songs and movies:

(Not sure what those black dots mean in between the katakana above? See our article on Japanese punctuation here!)

Fujin / 婦人 is an old-fashioned term with a strong nuance of a married woman or a woman having a social role. This is how fujin came to be used to describe a classy woman associated with well known male public figures in entertainment or politics.

As Japanese society developed with the rise of women’s rights, fujin took on a derogatory meaning, kind of like saying a house-wife.

If you look closely at the first kanji character in the word fujin, you can see the radical for woman (女) on the left: 婦. The second half of this kanji character (on the right side), is houki / 帚 which means ‘broom’ in Japanese. The origin of the character 帚 comes from the Chinese word for a tool used to sweep an altar.

So the kanji characters 女 + 帚 (which make up fu / 婦 in fujin) give the imagery of a woman with a broom. As a result, the word fujin was thought to allude to a woman who only does housework / sweeping.

Note that when fujin is written with the alternate kanji 夫人 it is an honorific word for wife.

Just like how in English there are different nuances between the words woman, lady, female and so on, there are various words for ‘woman’ in Japanese! Pay attention to the words you use so you don’t cause offence.