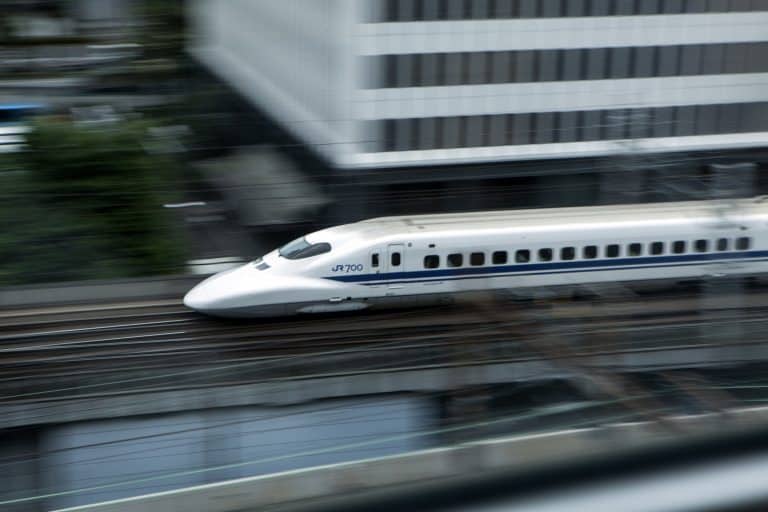 Team Japanese uses affiliate links. That means that if you purchase something through a link on this site, we may earn a commission (at no extra cost to you).
928 shares
LIMITED TIME OFFER!

So, you decided to learn Japanese. Congrats!

But that’s not enough. Maybe you started studying, you bought yourself a textbook or an online Japanese course, and now you’re starting to despair.

Japanese is hard! Progress is slow! Why are there so many kanji?!

Don’t worry, my friend. Yes, studying a language does take time, and there’s no fast track to real fluency.

But the good news is, you can get to a very good level of Japanese faster than you think. 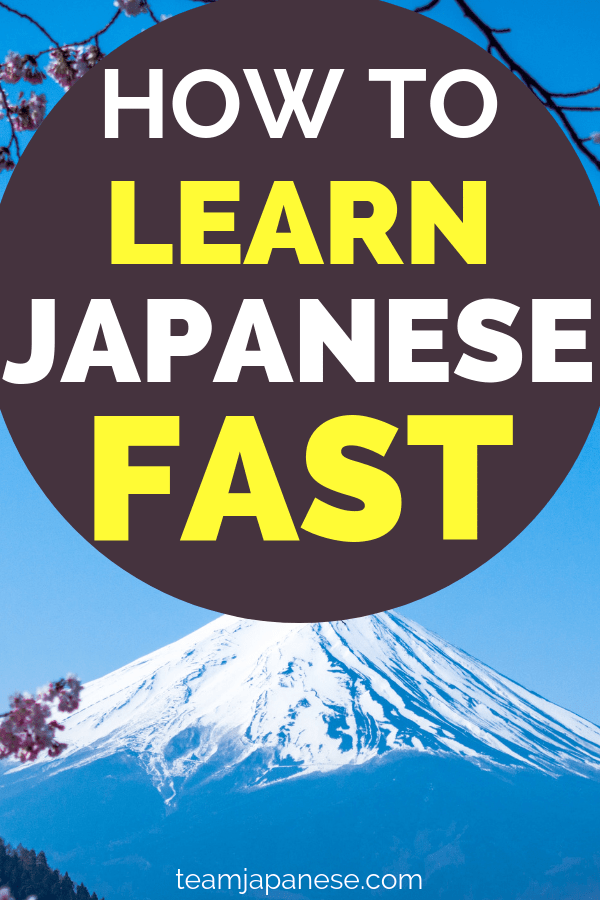 1. Identify your goal – and FOCUS

Take a few minutes to think about why you’re actually learning Japanese. What specific goal do you hope to achieve?

Then think about which aspects of Japanese you need to prioritise in order to reach your goal.

You do not need to know every word in the dictionary, and you don’t need to write in perfect calligraphy.

For example, if you need to learn to speak Japanese (perhaps to communicate with family or take a trip), do you really need to spend time learning kanji at this stage?

Yes, you will need to learn a certain number of kanji at some point if you want to become fluent – but they are actually not essential to everyday (spoken) communication, and you could save yourself a whole lot of time and stress by postponing that part of Japanese.

Similarly, if you need to learn Japanese for business, focus on learning vocabulary relevant to your field of work. Many Japanese courses start with words related to travel and tourism, which may be a waste of time in your case.

2. Learn the most common words first

Not all words are created equal!

Have you ever come across a crazy word in your Japanese textbook and thought ‘why do I need to know this? I never use this word in English!’

Well, if you want to learn Japanese fast – just don’t bother! The language police aren’t going to come after you for not learning every singe word in the dictionary!

Instead, it makes sense to focus on the most useful words.

JapanesePod101 has a list of the top 100 most common words in Japanese so you can safely learn those first without worrying about wasting your time. (You can also access the top 2000 with a premium membership).

Learn the words that actually come up the most in everyday conversation, and you’ll be on the fast track to being able to communicate in Japanese.

3. Make use of Japanese words you already know

On the topic of learning vocabulary in a smart way, did you know that a lot of Japanese words actually come from English?

There are hundreds, if not thousands of Japanese words that are borrowed from English. So if you learn to recognise and make use of these words, you’ll automatically have a huge vocabulary!

And if you know any other languages that have influenced Japanese – such as French, Portuguese or Chinese – you have an even bigger head start! 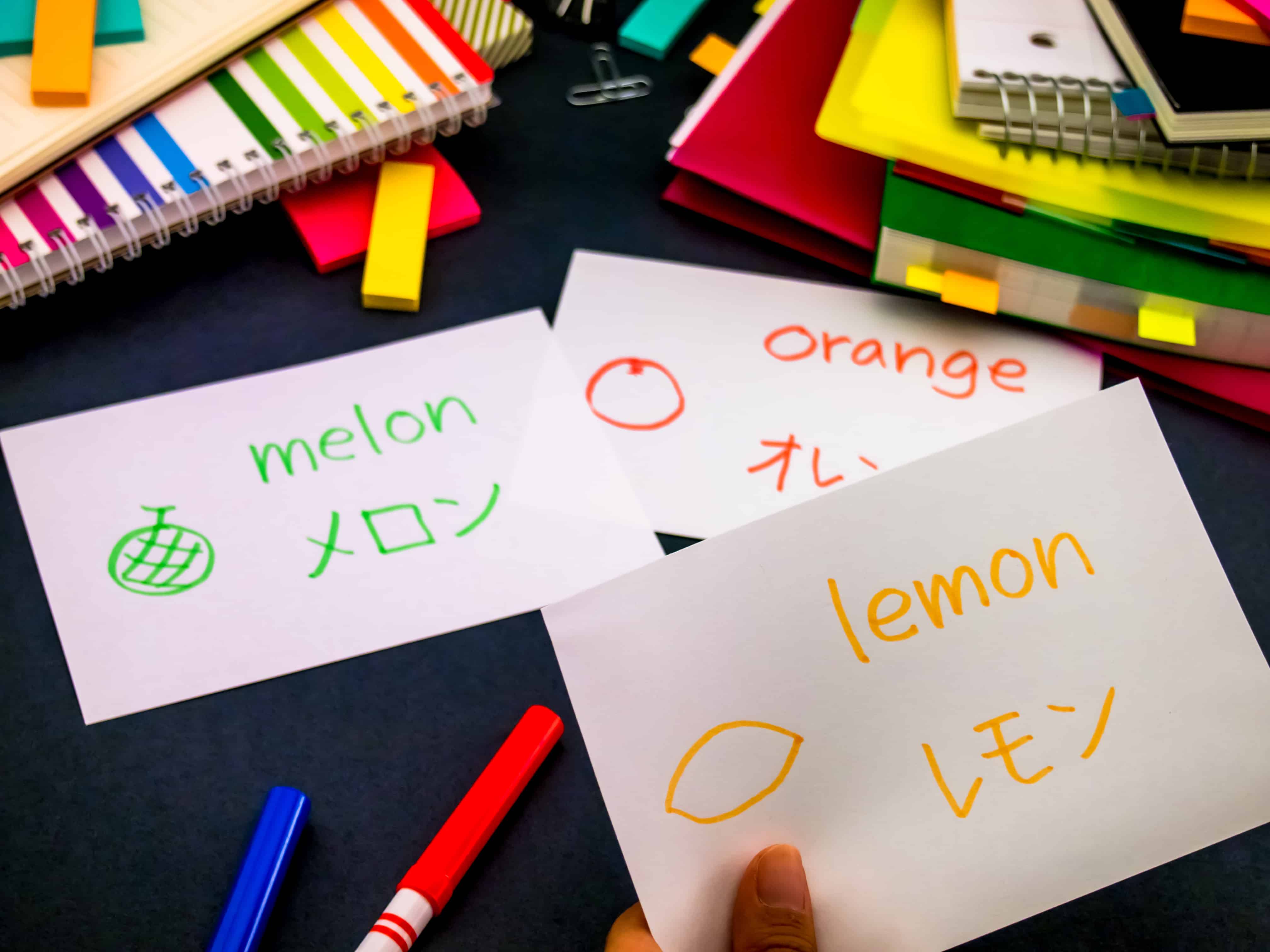 Play something Japanese all the time. ALL the time.

Music, radio, movies, it doesn’t matter – but Japanese should be the new soundtrack to your life.

Lots of listening to authentic Japanese can really improve your pronunciation and intonation. Plus, it will help reinforce new vocabulary and grammar points that you’ve studied.

Some people claim that if you listen to enough Japanese, you will eventually start to understand it. I’m not sure about that – I think it will take a very long time to learn a language passively, through listening only without any formal study.

But if you are also studying from books or courses, there’s no doubt that lots of listening practice will help accustom you to the sounds of Japanese, and can seem to accelerate your learning.

There’s even a school of thought that claims you can learn a language by listening to it in your sleep! If you’re interested, give this video from JapanesePod101 a try 🙂

Learning Japanese shouldn’t be something that happens once a week in a classroom. If you want to learn Japanese fast, you need to study as much as possible. And if you don’t have time to study, you need to make time.

I’m talking about making use of dead time. This is the time we lose every day, when we aren’t being productive. For example, when you’re commuting to work or school, or while you’re waiting for someone.

The trick is to find ways to study in these little pockets of time here and there.

I especially love Japanese podcasts and audio courses for this, such as those offered by JapanesePod101. You can listen to audio lessons while you’re driving, walking, cooking, doing the housework, or even taking a bath!

Another good way to use dead time is with language learning apps. I use Anki, a flashcard app, to record all new words and kanji. Then I can quickly whip it out and run through a few repetitions when I have five minutes to spare.

6. Swap out your everyday habits with Japanese ones

If you’re serious about learning Japanese fast, you need to make some drastic changes. The good news is, you don’t have to change up your lifestyle – just switch out the language!

Look for ways you can replace the things you do every day with Japanese equivalents.

This way, you’ll be exposed to Japanese throughout the day, and it won’t feel like a big challenge.

If you’re super serious, you could aim to cut out English as much as possible! The aim is to create an immersion environment for yourself – a little bubble of Japan, wherever you are in the world.

Mnemonics are memory devices that help you remember something. A mnemonic could be a story, picture, or even a song! They don’t work for everybody, but if mnemonics work for you, this can be a super powerful way to learn a language fast.

For example, here’s a video that teaches hiragana by creating a little picture around each character. That’s a kind of mnemonic.

Here’s an article that talks about how to create your own mnemonics for new vocabulary items.

And one of the most famous (or infamous) ways to use mnemonics in Japanese is the kanji guide Remembering the Kanji, a love-it-or-hate-it book which has helped many people learn the 2000+ jouyou kanji in record time.

8. Stop being a perfectionist

When you want to learn Japanese fast, you simply can’t be a perfectionist.

For a start, if you’re aiming to learn a language in record time, you can’t aim for perfection. You have to aim for passable communication, or whatever goal you set in step 1. It’s much more achievable and you’ll get there faster.

It’s also important to get over your fear of making mistakes. The more mistakes you make, the faster you learn. That’s because you’re putting in effort, and you’re hopefully learning from your mistakes and correcting it the next time.

If you’re too scared to make mistakes, you’ll never even open your mouth to speak – which means it’ll take you that much longer to get to a place where you can communicate.

9. Speak as much as possible

Speaking is great for fast learning because it forces you to THINK!

You can’t just coast by passively when you’re having a one-on-one conversation with someone. When you are actively using the language for yourself, you’ll learn twice as fast – and remember things better too.

It’s important to get as much speaking practice as possible, right from the beginning.

And no excuses if you don’t live in Japan or don’t know any Japanese people. There are several websites where you can find Japanese language exchange partners online, for free. Or pay for an inexpensive online personal tutor at italki.

Still haven’t got anyone to practise speaking with? Speak to yourself! Get in the habit of narrating your day to yourself in Japanese. If you’re in public, do this in your head.

Training yourself to think/speak to yourself in Japanese is a great way to squeeze as much Japanese as possible into your day and review what you’ve been learning. You can do this right from the beginning of your studies, even if it’s just naming things around the house or describing your dinner.

What do you think? Do you know any more hacks to learn Japanese fast? Share with us in the comments! 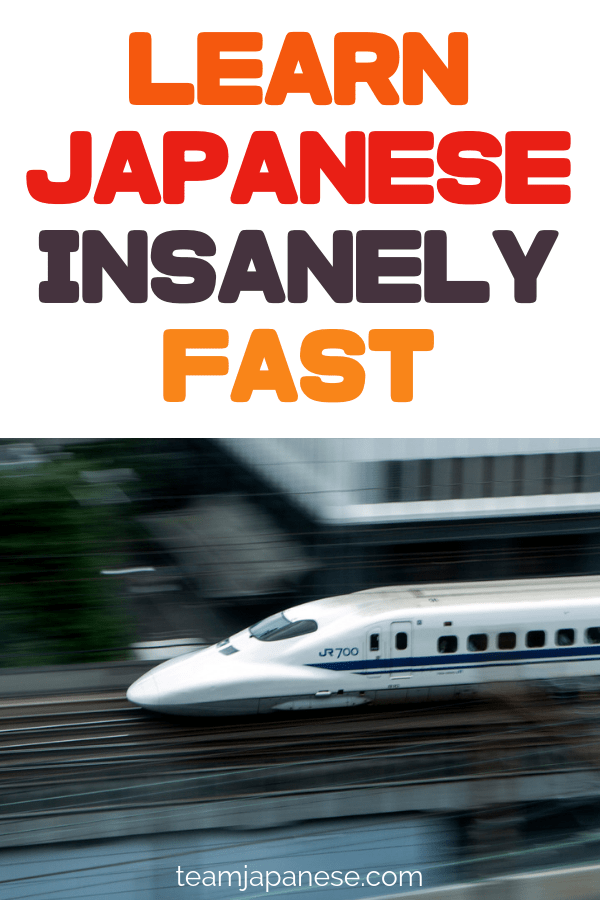