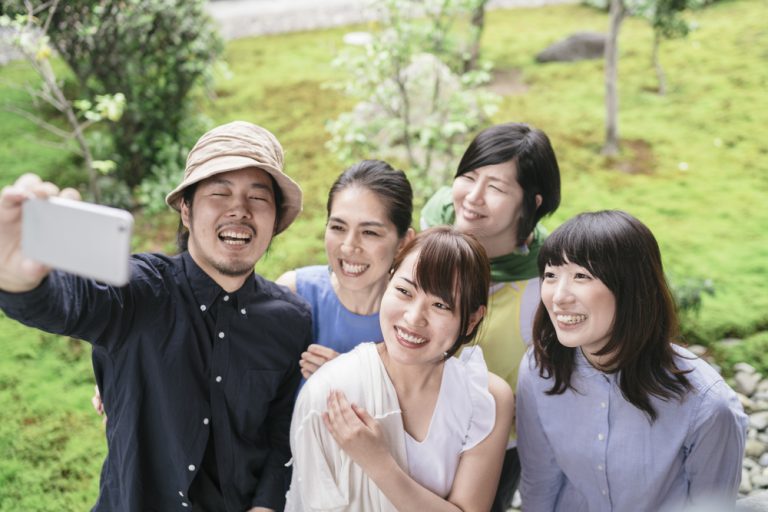 The word for ‘everybody’ in Japanese is minna (みんな). When calling others’ attention, addressing a group or talking about ‘everybody’, the proper word is mina-san (皆さん / みなさん). You can also use minna for inanimate objects when saying ‘everything’ or ‘all’.

One of the most common beginner mistakes in learning Japanese is confusing mina and minna (I know, I’ve been there, too 😔). The easiest way to differentiate is that minna is casual and often used alone, while mina is used with an honorific suffix, like -san or -sama.

The meaning of minna in Japanese

As mentioned earlier, mina can be used when talking about either living things or inanimate objects.

Everybody (casual), all, everything

Minna (皆 / みんな) is an informal, friendly way to say ‘everyone’ in Japanese. In context, it’s more like a ‘“Hey guys!” than a “Ladies and gentlemen!”. This can be used when casually addressing close friends and family.

Minna is also used when talking about a large group of people.

It sounds quite colloquial, making it more common in spoken Japanese rather than in writing. However, you can see minna in short messages, social media, manga, anime, or letters that are created in a casual situation or context. It’s typically written in kanji (皆) or hiragana (みんな).

Mina-san is for addressing a group of people in a more formal setting. Mina-san (皆さん / みなさん) means ‘everyone’ or ‘all of you’. The honorific suffix -san is added to make the word polite. It’s just like addressing somebody as ‘Mr.’ or ‘Ms.’ in English.

In everyday situations, mina-san is heard very often, just like minna. But as shown in the examples below, the former is more polite.

If you’re taking Japanese classes, your sensei probably addresses the students as mina-san. When you are asked to recite or give a speech in front of the class, you are expected to address your classmates the same way.

Mina-san is best for people you are not very close with. Some examples of situations where you hear this are during school or class assemblies, office meetings, and community gatherings.

The variation mina-sama (皆様 / みなさま) is a very polite or formal way to address a group of people. Think of this as “Ladies and gentlemen”!

This is a major level-up from minna and mina-san, so the speaker is showing respect to the people they are addressing. The honorific suffix -sama (～様 / ～さま) can be for somebody you don’t know at all, or one who is of higher status or ranking than you.

Situations where mina-sama can be used include formal events, speeches, announcements, business settings, speaking to customers, and addressing people in a formal written letter.

The correct way to say, write, and romanize the word is mina-san (皆さん / みなさん). It’s hardly noticeable in spoken Japanese, but in writing, it’s easy to tell if you’ve made a mistake.

Because the casual minna is often used, Japanese learners tend to just add the suffix -san and think it’s the same. It’s not!

In hiragana, the reading for mina-san (皆さん) is written as みなさん and not みんなさん. Although the kanji alone (皆) can be read as mina or minna, it depends on the context in which it is used (casual vs. formal)

Minna is casual, while mina-san is polite and uses an honorific suffix. It cannot be polite language to combine a casual word (minna) with -san. In other words, minna never uses -san, therefore the word minna-san does not exist.

How to say “Hi everybody” in Japanese

Now that you know how to use the words for ‘everybody’ in Japanese, let’s take a look at some basic greetings you can use with mina-san!

Good afternoon, everybody / Hi everybody

If you watch a lot of Japanese YouTubers, vloggers, or variety shows, this is a very common opening line for their videos! Mina san, konnichiwa as ‘hello everybody’ is a warm and familiar way to greet their audience and viewers.

Konnichiwa means ‘good afternoon’, so you will likely be hearing it at that time of the day. It is also one of the basic and easiest ways to say hello in Japanese!

In the morning, you can greet your coworkers or classmates by saying mina san, ohayou gozaimasu. Same with the previous phrase, this is a polite greeting. Although this is the part of the greeting that makes it formal, it is possible to omit gozaimasu (ございます) if the situation calls for slightly less formal speech.

When meeting a group of people for the very first time, such as on your first day of school, the phrase mina san, hajimemashite can come in handy! This is how you say ‘hello everybody’ before beginning your jikoshoukai or self-introduction.