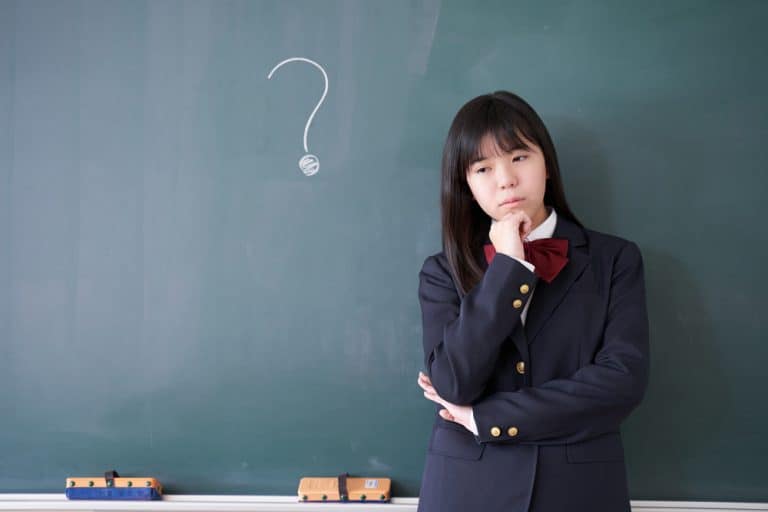 Team Japanese uses affiliate links. That means that if you purchase something through a link on this site, we may earn a commission (at no extra cost to you).
27 shares
LIMITED TIME OFFER!

Punctuation helps us express ourselves and show emotion in our writing but did you know that it wasn’t a part of the Japanese language until the Meiji era?

That’s right, Japanese punctuation was practically non-existent until 1946 when the Ministry of Education made it compulsory!

Nowadays, punctuation is a huge part of the Japanese language especially with the rise of instant messaging. Most Japanese used in casual writing like text and online messaging is full of punctuation marks, and some of them are used more by girls than boys!

Let’s take a look at the different types of Japanese punctuation marks so you can add some flavor to your writing!

A note on half-width vs. full-width characters in Japanese

If you’ve ever had to fill out an online form in Japanese, you would have come across the concept of ‘half-width’ (半角 / hankaku) vs ‘full-width’ （全角 / zenkaku） characters.

If you are on a computer, you can try highlighting each of the exclamation marks above with your mouse to see the difference in spacing for full-width (left) and half-width (right) characters!

Now, on to the punctuation marks:

Just like in English, Japanese uses the period or full stop punctuation mark (depending on where you’re from!) to end a sentence.

Note that the Japanese period is more of a small circle instead of a dot (。vs . ).

The proper name for the Japanese full stop is kuten (句点） but it’s usually just called ten and sometimes maru.

As mentioned above, the Japanese ten is a full-width character, meaning you don’t need to add a space after it to begin a new sentence like we do in English.

So if you’re typing, you can immediately begin the next sentence without a space, it will be there already:

The use of the Japanese comma is the same as in English, except the shape is a little different! You can see the difference here (the Japanese one is first):

Comma usage is more common in Japanese than English and there’s a lot more freedom around when and where you can use them.

When Japanese is written vertically, the comma is placed at the bottom right:

The Japanese exclamation mark is called kantanfu (also bikkuri maku / ビックリマーク) and is used much in the same way as English.

The only difference between the Japanese and the English exclamation mark is that there is a larger space around the Japanese punctuation mark due to the full-width spacing of Japanese characters.

Even though Japanese has the interrogative particle か (ka) for questions, the question mark (gimonfu) is now used in Japanese writing just like it’s used in English!

Also known as hatena maku （はてなマーク）and kueschon maku (クエスチョンマーク) it can be placed at the end of a sentence to indicate a question and as you would have guessed by now, it also takes up a full-width space:

The measurement of the duration of a sound in Japanese is called morae, and a single unit is known as a mora. One katakana character is equal to one mora, and one chōonpu (ー) also equals one mora!

The chōonpu is most frequently used in words written with katakana characters because they are foreign words meaning they usually have longer vowel sounds than regular Japanese vowels.

For example ‘coffee’ is written as コーヒー (koo-hii) and ‘table’ becomes テーベル (teeh-beh-ru) in katakana. This means the vowel sounds have an extra mora (an extra unit of duration).

The chōonpu punctuation mark can also be used in casual writing to express enthusiasm or an affectionate greeting.

If you haven’t heard from a friend in a while, you can use many chōonpus in a row to show your excitement:

Be careful not to confuse the chōonpu （ー）with a hyphen (-) which is way smaller.

And the award for cutest Japanese punctuation mark goes to the wave dash 〜(namidashu)!

The wave dash is kind of like the chōonpu because the most common use is to show a long, drawn-out sound (almost as if the person is singing the sound) as in:

Much like how we can add extra vowels to a word in English, namidashu shows an affectionate, warm feeling from the person writing. The difference between chōonpu and namidashu is that the wave dash has a feminine feeling to it.

The wave dash can be accompanied by the musical note mark ♪ (音符 / onpu) to add more of a kawaii nuance:

The wave dash is also used to show time range for example ２時〜４時 in which case it would be read as …kara…made (so ２時〜４時 would be read にじから よじまで）. Other uses of namidashu are to replace a colon or ellipses, surrounding words to replace brackets or parentheses and to distinguish a title from a subtitle.

Santen rida is the ellipsis punctuation mark in Japanese or what we call the dot-dot-dot. We know san (三）is the word for 3 and ten (点） is the word for ‘period’ or ‘full stop’ so together we get ‘3 full stops’.

In Japanese, the ellipsis is mainly used to show silence, a pause or contemplation as it is in English and the actual punctuation mark used is the same as the English period.

Naruhodo… ashita demo ii!
なるほど…明日でもいい！
なるほど…あしたでもいい！
I see… but tomorrow is okay too!

The interpunct (nakaguro) is unique to Japanese and is mainly used to divide foreign words which are written in katakana (for this reason some people call it the kana splitter).

For example, the two words that make up the rock band’s name ‘Led Zeppelin’ would be divided by the interpunct in Japanese:

Or each word in the name of the Beatle’s song, ‘Lucy in the Sky with Diamonds’:

The interpunct is used in foreign names too:

Other uses of the interpunct include as a comma to separate listed items as in:

And to separate titles and names for example:

The interpunct can sometimes be used to replace hyphens, colons and dashes when writing Japanese vertically.

Parentheses and brackets deserve a post of their own but the regular round parentheses we have in English are also used in Japanese in the same way!

Other types of brackets include {  } nami kakko （波括弧 / wavy brackets), [  ] kakku kakko（核括弧 / square brackets) and ＜ ＞ yama kakko （山括弧 / angle brackets literally ’mountain bracket’), which are not to be confused with the less than and equal to signs (< >).

All of these brackets are used to emphasize titles, phrases and sentences you want to highlight.

It’s common to see multiple brackets used in promotional content such as texts, emails and advertisements.

For example, an Uber promotional I received yesterday read:

Another punctuation mark unique to Japanese are lenticular brackets (sumitsuki kakko) which like the above brackets are used for highlighting parts of a sentence that you want to stand out.

The difference is that lenticular brackets are not used in English but they are frequently used in Japanese.

You can use lenticular brackets to put a catch-phrase at the beginning of a title, to highlight the key points of a message or even in the same way as quotation marks.

Lenticular brackets are very common in Japanese marketing material such as product titles and promotional content.

For English speakers, the Japanese quotation marks take some getting used to because they look so different!

Known as kagi kakko, these are used when quoting anything and can be rotated 90 degrees to suit Japanese when written vertically.

An example of Japanese quotation marks used within a news article:

大学の一年生は「水筒が使いやすくなると思います」と話しました。
A first year university student said “I think the water bottle will be easier to use.”

The Japanese double inverted commas are called niju kagi kakko and they are used to quote something within a quote so you will find them within kagi kakko （「『』」）.

Komejirushi is the Japanese asterisk and it literally means rice symbol due to its resemblance with the kanji character for rice（※ / 米）.

A little bigger than the English version of the asterisk, the komejirushi is an X with a dot in each space surrounding it and is used to add annotations, notes and precautions in reference to or within a body of text.

The komejirushi can be placed within (  ) parentheses for ease of reading:

Punctuation doesn’t often feature in language courses for beginners, but if you spend just a little time familiarising yourself with some of the most common symbols, you won’t be so baffled when you see them in the wild.

If you’re ready to take your Japanese study further, our top recommended course for beginners is JapanesePod101!

It’s free to join and you can dive right in with hundreds of audio lessons. Or download some of their useful tools, such as the free kanji workbook or printable hiragana and katakana practise sheets.

Do you know any more Japanese punctuation symbols? Did any of these surprise you? Let us know in the comments!

2 thoughts on “Essential Japanese Punctuation Marks you Need to Know!”