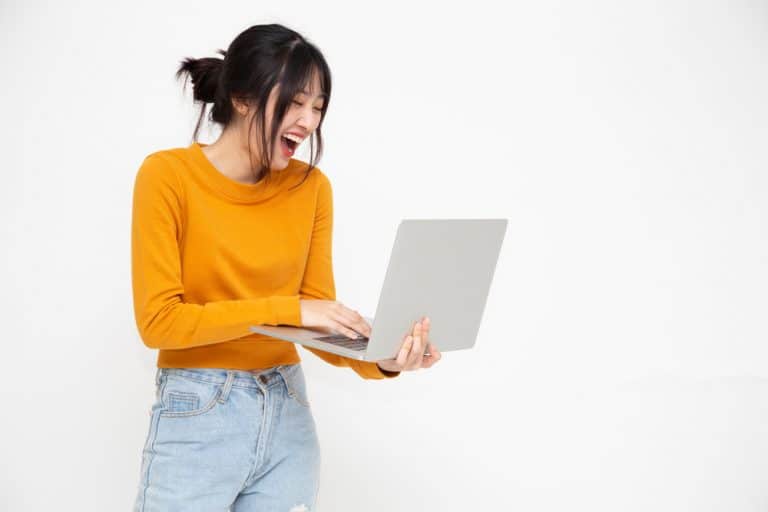 Team Japanese uses affiliate links. That means that if you purchase something through a link on this site, we may earn a commission (at no extra cost to you).
66 shares
LIMITED TIME OFFER!

Have you ever wondered how English internet slang words like ‘lol’ and ‘lmao’ translate into Japanese?

Look no further, we have the answers right here. Since the dawn of the internet, the way we communicate has changed, whether you speak English or Japanese!

Words like ‘lol’ became a natural part of internet slang because we had to find a way to express laughter and other parts of everyday language in a casual, written form for our online conversations!

The internet is worldwide so naturally Japan also developed its own online lingo to express different emotions, gestures and sounds!

If you’re curious about how to use words like ‘lol’ and other internet slang in Japanese, read on!

笑 (wara) is the equivalent of ‘lol’ in Japanese. The character 笑 means ‘laugh’, which is a short form of the verb 笑う / わらう ‘to laugh’.

The character for wara 笑 (also pronounced emi) is sometimes put in brackets like this (笑) which is read as kakko wara.

To write ‘lol’ in Japanese, you can put kakko wara (笑) or just wara 笑 at the end of a sentence when you want to show amusement:

Bakushyou (爆笑) translates to a ‘roar of laughter’ or ‘explosive laughter’ and is a way of expressing intense laughter in Japanese internet slang, just like ‘ROFL’ or ‘LMAO’ in English.

The characters for bakushyou are 爆 which means to bomb, burst, open, split or pop and 笑 which we know from the previous example as ‘laugh’.

You can use bakushyou when you find something exceptionally funny that warrants more than just a ‘lol’!

マジで？爆笑
Are you serious? LMAO

To understand how 藁 (hay / dried straw) translates to ‘lol’ in Japanese, we have to explain how a Japanese virtual keyboard works.

As you know from the first word on this list, the character for laugh in Japanese is 笑 which is pronounced wara.

When using a Japanese keyboard on a mobile device, the character 笑 only appears as an option when you type the two hiragana characters for wara which are わ (wa) and ら (ra).

Japanese is full of homonyms. These are words that are spelled or sound the same but have different meanings i.e. wait and weight in English. So there is more than one kanji character which can be pronounced wara (わら).

藁, the kanji for hay / dried straw, is one of those characters that has the same reading as 笑 (wara) – so it became a substitute for ‘lol’!

These days you don’t see 藁 much on the internet because it was more a thing of netizens 10 years ago. It’s a little owakon (see below) now!

Writing a word like hahaha is pretty easy in Japanese because it can be written exactly as is using the two syllabaries hiragana and katakana for example: ははは / ハハハ (hahaha) !

It’s generally agreed that you can write any arrangement of the H syllables in Japanese to express different types of laughter using repetitions of either ‘ha’ ‘hi’ ‘fu’ ‘he’ and ‘ho’ as follows:

For a more in depth explanation, check out this Pera Pera Penguin 5-minute Japanese class by Hitomi Hirayama.

According to internet myths, www (meaning ‘lol’ in Japanese) emerged around 1996 because Japanese internet users playing World of Warcraft could not type the character ‘笑’ on keyboards as they did not support Asian characters at the time!

We know that w is the first letter of the Japanese word for laugh if we type it in Roman letters – warau (笑). But legend has it that over time, gamers got lazy typing the full word wara or warau into the chat box, so they began shortcutting it with just w!

The more w’s you write in a row at the end of a sentence in Japanese, the harder you’re laughing (or expressing your laughter)!

Believe it or not, this then led to the creation of the next word on this list kusa (meaning grass) – because of the fact that when you put tons of w’s next to each other like this ‘wwwwwwwwww’, it looks like grass!

Kusa literally means ‘grass’, but as mentioned above it became an internet slang for ‘lol’ and ‘hahaha’ in Japanese because of the way wwwwwwwwww (also slang for ‘lol’) looks like grass.

Kusa is limited to (written) internet/text messaging use, like most words on this list. So you would never say kusa in the middle of a conversation!

A few variations of kusa have developed over time including kusa haeru (草生える / くさ はえる）which literally means ‘the grass is growing’, but represents laughter getting louder and louder.

Like most things on the internet, slang will go from 0 – 100 real fast, so even the word daisougen (大草原 / だい そうげん) meaning ‘giant grass field’ developed as a variant of kusa (grass) to express uncontrollable laughter (basically wwwwwwwwwww x infinity). Lol!

888 in Japanese is an internet slang phrase mainly used on Twitter that codes for the sound of someone clapping, which is pronounced as pachi pachi pachi.

888 is used to express support for someone’s tweet, comment, or status on any social media platform. It’s also used on streaming and gaming platforms.

The number 8 is usually pronounced hachi / はち in Japanese, but the sound when 8 is repeated multiple times in internet slang is pronounced pachi / ぱち. This is the same pronunciation as the onomatopoeia for applause (拍手 / はくしゅ hakushu) in Japanese.

It’s up to you how many 8s you want to place in a row!

Some fun variants that turn up occasionally are 777 (for something not quite good enough to applaud) and 999 (even better than regular applause).

Many of you will already know that otsukaresama deshita is a common Japanese phrase for thanking and acknowledging someone for their hard work or contribution to a shared event or activity.

Otsukaresama deshita is a formal phrase typically used at the end of a work day to thank and say farewell to a fellow colleague.

As you can see, otsukaresama deshita is a great candidate for Japanese slang because it’s quite a long phrase, so it naturally gets shortened in everyday conversation in the following order:

The kanji used for otsu here 乙 does not actually refer to the otsu in otsukaresama deshita. Sometimes called the fish hook radical, 乙 is simply used in internet slang for it’s pronunciation, not it’s meaning, which is known as ateji (phonetic spelling) in Japanese.

Ateji are like kanji puns; they are kanji that sound the same / are pronounced the same but used for convenience sake because they have an entirely different meaning.

For those of us who want the low down on the latest news (or let’s be honest, gossip!) KWSK is the Japanese internet slang for ‘Details please!’

Kuwashiku (詳しく) literally means ‘in detail’ and is shortened to KWSK because these are the first roman letters of each hiragana character that makes up the word ku wa shi ku (くわしく) .

So the next time you want your friend to spill the beans or elaborate, you can just type KWSK and they will know exactly what you mean!

Owakon (オワコン) is short for ‘owatta kontentsu’ (おわったコンテンツ）meaning ‘finished contents’ or ‘ended contents’ and refers to something that used to be popular but quite frankly now, no one cares about!

The word kontentsu (contents) is not usually used for people in Japanese but when using owakon you can refer to anyone or anything!

For example, owakon is used to talk about things such as a product, game or anime that is no longer trending or cool anymore. Owakon can also be used for a celebrity, song or other part of pop culture that is no longer a hit and has gone out of fashion.

For example of an anime:

あのアニメも、もうオワコンだよね。
That anime’s so over, isn’t it.

If you want to chat online with your Japanese friends, or you follow any Japanese online communities, you will definitely need to know how to say lol in Japanese and other examples of internet slang!

Do you know any other fun internet/text slang words in Japanese? Share them in the comments!

To learn more modern Japanese – the way it’s actually used – we recommend JapanesePod101. With literally 100s of lessons, you can dive deep into Japanese slang, conversational Japanese and more.

Sign up for a FREE lifetime account here (no card details needed) and try it for yourself.