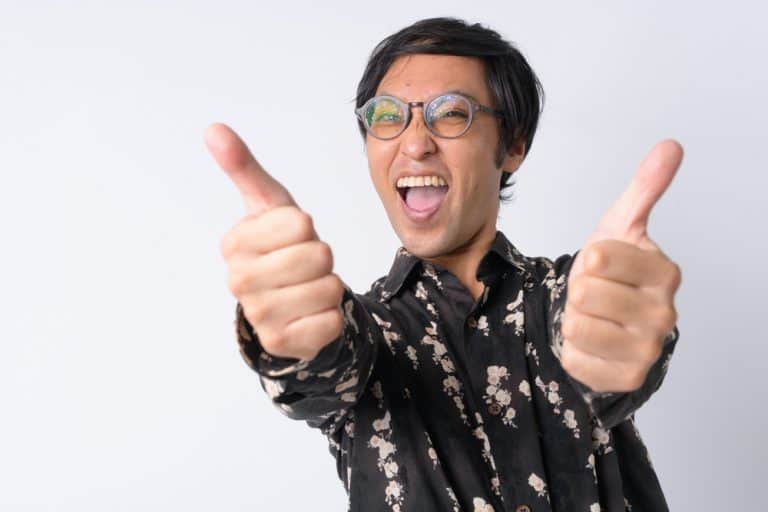 Team Japanese uses affiliate links. That means that if you purchase something through a link on this site, we may earn a commission (at no extra cost to you).
1411 shares
LIMITED TIME OFFER!

When we say ‘yes’ in Japanese, there is actually more than one way to express our agreement depending on the situation and who we’re talking to!

The first word we encounter when we’re learning how to say ‘yes’ in Japanese is hai (はい). But there are many other words and phrases you can use together with hai, or instead of it, to better fit the tone of the conversation.

To learn more formal and casual ways of saying yes in Japanese, let’s take a look at the words below!

Hai directly translates to ‘yes’ in English. This is the best way to say yes in formal conversations, but it is also acceptable in casual ones.

If you wish to express something along the lines of ‘yes, yes’ as you would when encouraging someone to continue talking, be cautious when you use hai! Saying ‘hai, hai‘ might sound like you’re annoyed or dismissing what the other person is saying. It’s better to use one of the next words on this list, sou/sou desu (そう / そうです)!

Un is more of an utterance rather than a word. It is more commonly used in less formal conversations. This can also be used the same way as ‘uh-huh’ in English to let someone know that you’re paying attention.

Here is a video guide to pronouncing un and its counterpart uun (ううん), which means ‘no’ in Japanese. Yes, they look pretty similar written down, but you should be able to hear a difference!

Interjections like un are also called aizuchi (相槌 / あいづち). These are sounds or utterances that Japanese use to show someone that they are paying attention!

This expression is pronounced as ‘ehh’ and is commonly used in more casual conversations with friends and family. Ee can also be used to express surprise in a conversation. This is also another aizuchi!

In a conversation, sou desu is a phrase used to say that we agree with someone (again, another aizuchi). While this is applicable in all social situations, sou desu has different varieties to suit other levels of formality.

A few examples are:

Another way to say yes in a conversation, especially when encouraging the other person to continue talking, is sou, sou (そうそう).

The word ii (いい) means ‘good’. Saying ii desu in a conversation would mean that you agree with the other person’s ideas.

You can also use this to accept invitations or suggestions. When speaking with Japanese friends, it’s acceptable to drop desu to make it more casual.

Daijoubu desu is a very useful phrase in many different situations! When you use this to say yes in Japanese, it’s usually said as a response to a question asking if something is okay to do.

If you sincerely or enthusiastically agree with someone, zehi conveys those strong emotions! This word can be used in both formal and informal situations.

When saying yes at work, you can use shouchi shimashita after acknowledging something your boss said. When using this, it is expected that you know or learned something new.

I understand / Roger that

This phrase is used like ‘Okay’ or ‘Roger that’ in two-way radio communication, like in the military forces. In a normal work setting, this can also be used to indicate that you will follow a boss’ orders.

While this is mostly used in business settings, you can also use it in other formal or informal situations. Ryoukai (了解 / りょうかい) means ‘comprehension’ or ‘agreement’.

In agreeing to make a request (for someone’s help or services), yoroshiku onegaishimasu works well as a counterpart for ‘yes, please‘ in English.

Yoroshiku onegaishimasu is also one of the handy Japanese phrases that can mean different things depending on the situation!

This is another way to say you agree with someone. Wakarimashita or wakarimasu is more polite, so when using it around friends, you can shorten it to its -ta form wakatta (わかった).

The verb wakaru (分かる / わかる) means ‘to understand‘. In this context, it means ‘I agree‘.

Though this word is borrowed from English, the Japanese use this in most daily conversations in a casual setting.

Okkee is more of a pronunciation guide. It isn’t used when typing, because Japanese would just type OK the same way as it is in English.

Mochiron expresses consent or permission, like saying ‘of course!‘ when someone asks if it’s okay to bring a friend along to a party. To make it more formal, you must add desu to this word.

This word is commonly seen written in hiragana, but there is a kanji form for mochiron (勿論 / もちろん). The first kanji mochi (勿) means “not” and the second, ron (論) means ‘argument‘. It’s like saying ‘no argument‘ to express that you completely agree with the other person.

Ways to say yes in Japanese

As you can see, there are many different ways to say yes in Japanese. We hope this post will help you pick the best word for your situation! Mastering all these different words for yes in Japanese will really help your speaking sound more natural.

Next, learn some different ways to say no in Japanese.