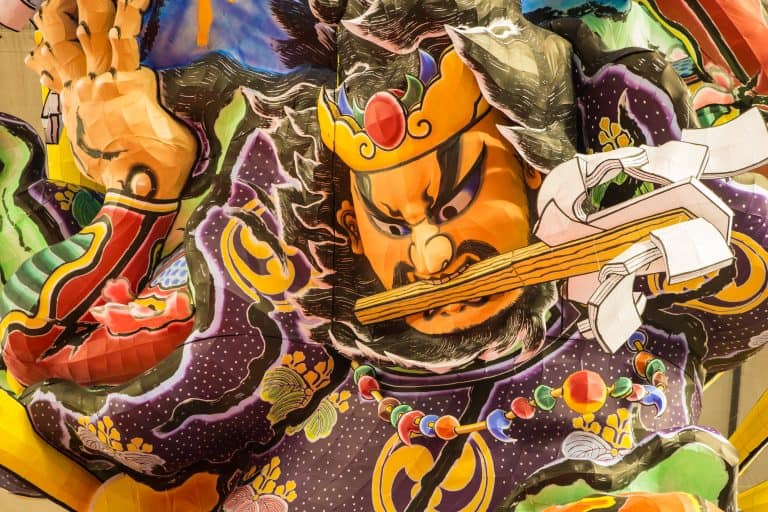 Team Japanese uses affiliate links. That means that if you purchase something through a link on this site, we may earn a commission (at no extra cost to you).
654 shares
LIMITED TIME OFFER!

Everybody loves a party. And not many people love a party more than the Japanese!

Each year, thousands of different festivals take place across Japan. These festivals are usually rooted in the Shinto tradition. Many date back hundreds of years.

However, Japanese festivals are more than just a religious event. They represent a chance to bond with the community, let your hair down – and drink lots of beer.

Many of these festivals are playful, silly, and even downright bizarre.

Here are my top 10 craziest festivals in Japan. 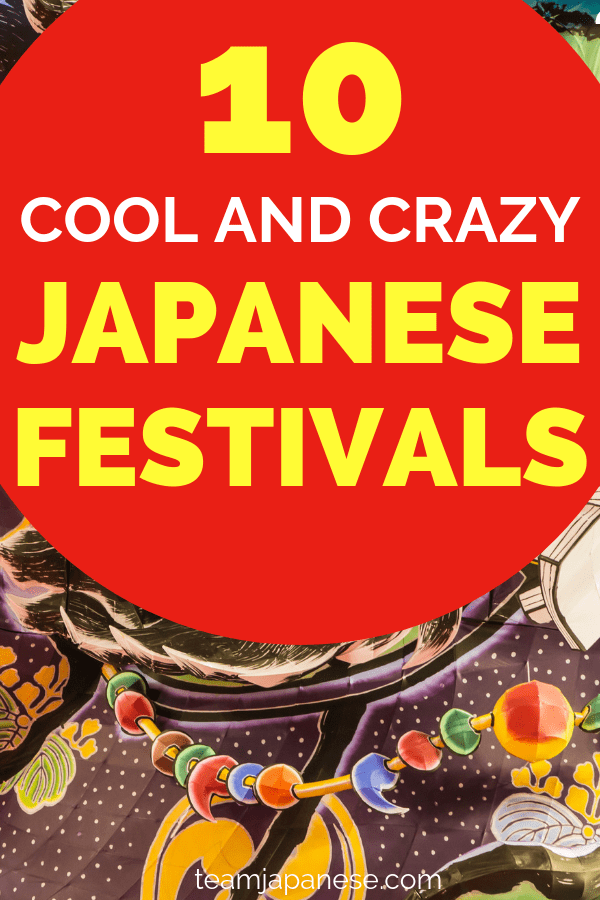 Hadaka matsuri translates as ‘naked festival’. Despite the name, most festival-goers are not actually naked. Participants dress in a sumo-style loin cloth called fundoshi.

There are actually several naked festivals around Japan. The most famous is held at Saidaiji Temple in Okayama. This bizarre festival is over 500 years old.

Each year, over 9,000 loin cloth-wearing men crowd into the temple and fight each other for a bundle of sticks, thrown out by a priest. The lucky man who grabs the sticks wins a blessing – a year of happiness.

But before the main event takes place, the competitors march around the temple grounds getting splashed with water. Not so much fun when you consider that the festival takes place in freezing February.

Of course, participants consume a large amount of alcohol to help stay warm. This makes the festival a great chance to check out the famously crazy Japanese nightlife!

When: Third Saturday in February

Nakizumo means ‘crying sumo’. But you won’t see any sumo wrestlers weeping at this annual festival at the Sensoji Temple in Tokyo.

At this weird Japanese festival, sumo wrestlers hold babies up in the air to make them cry. If being dangled in the air by a 150 kg man doesn’t do the trick, the wrestlers resort to funny faces and masks.

It might seem cruel, but the aim of the festival is to pray for the babies’ health and growth. It’s believed that the sumo wrestlers can startle the babies into crying out a prayer for their own development. 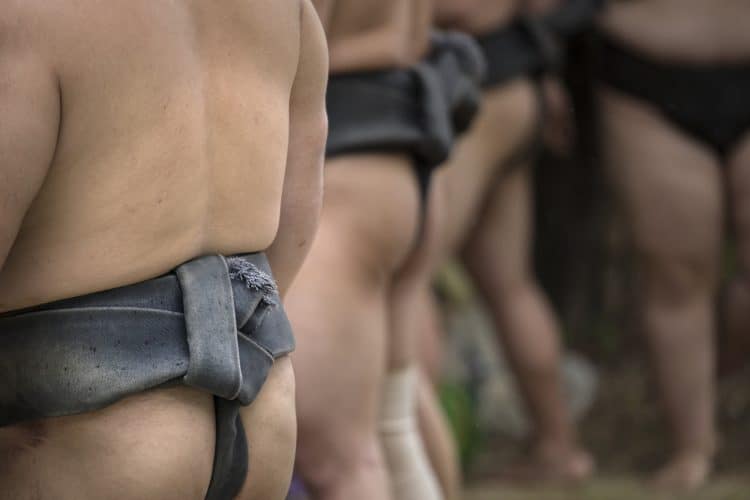 Held in Konan City, Kochi Prefecture in April, this crazy Japanese festival is based around the Japanese rice wine known as sake.

The highlight of the event is a sake drinking competition. Men have to down a whopping 1.8 litres of the liquid, whereas women get away with half that amount. This is obviously a lot of alcohol to drink quickly, so there are medical staff on standby.

Hopefully the winner doesn’t feel too sick after downing all that sake: one of the prizes is a tour of other regional drinking festivals.

Of course, the guest of honour is expected to keep up the drinking, acting as a kind of sake ambassador.

There is no shortage of competitors: the Kochi region has a lot of keen drinkers thanks to their warm climate and famously light sake. Kochi rice wine is said to be easier to drink that the sweeter wines from neighbouring regions.

Although the festival is best known as a drinking competition these days, it actually started off as a fishermen’s festival. Dorome is a kind of small anchovy, and the real purpose of the festival is to pray for a good catch.

Want to learn how to read Japanese before your next trip? Download your free hiragana and katakana workbook here!

You have to see this one to believe it!

A paantu is a kind of evil spirit or demon from Japan’s tropical southern islands of Okinawa. In this festival – which is held three times a year – selected men disguise themselves as paantu in leaves, mud, and masks, and run around terrorising the locals.

The paantu roam the villages of Miyako Island, splattering everything in mud as they go. Children, adults, cars, houses – nothing is safe during this bizarre festival!

And yes, it might be mucky, but the islanders don’t mind too much. In fact, if you’re touched by a paantu, it’s believed you’ll have good luck for the next year. The paantu‘s mud is a kind of cleansing ritual, believed to wash away evil.

This explains why parents love to hold their babies out for the paantu to touch. The children don’t seem to enjoy it much though. And why would they? The paantu are seriously creepy characters.

Children aren’t the only ones who aren’t crazy about the paantu. Each year, some unsuspecting tourists also get covered in the paantu‘s mud. Some outsiders – who haven’t heard of the festival, or don’t know about it’s spiritual meaning – complain to local officials.

A few years ago, one poor paantu was attacked after he chose the wrong man to splash with mud. Because of this, the festival organisers prefer to keep the numbers of outside visitors down. The dates are kept secret until a few days before.

This festival, held twice a year, celebrates the rice planting season in spring and the harvest in autumn. So far, so normal.

What makes this Japanese festival so crazy? That would be the sumo match against an invisible god.

Yes, the highlight of this festival is hitori zumo (‘one-man sumo’), in which a sumo wrestler takes on the god who is said to live in the shrine where the event takes place. The man and the god go head-to-head in three bouts.

Funnily enough, each year the god wins two of them. Not bad for an invisible deity!

The festival also features a rice planting event. 16 girls in traditional red and white outfits plant rice at the shrine’s paddy field. The wrestling match is actually a kind of offering to the god.

If the god wins, it means good things for that year’s rice crop. A similar sumo match is performed in the harvest season as a thank you.

The festival is held at Oyamazumi shrine, which is dedicated to the god of warriors. In years past, soldiers would travel to this remote island shrine from all over Japan to pray for a victorious battle. If they won, they came back to the shrine and left their weapons to say thanks.

While you’re in the area, don’t forget to visit the Treasure House museum next to the shrine. It contains 80% of all the samurai armour and weapons in Japan – at least, those designated as national treasures.

When: May 5 and September 9

Obon, a Japanese festival at the height of summer, is one of the most important times of the year in Japan. The Japanese believe that the spirits of their ancestors come back to visit during these few special days in the middle of August.

People return to their hometowns, visit graveyards, clean the home and prepare gifts for the spirits. The highlight is usually bon odori – a special folk dance performed in yukata (summer kimono) to the beat of drums. 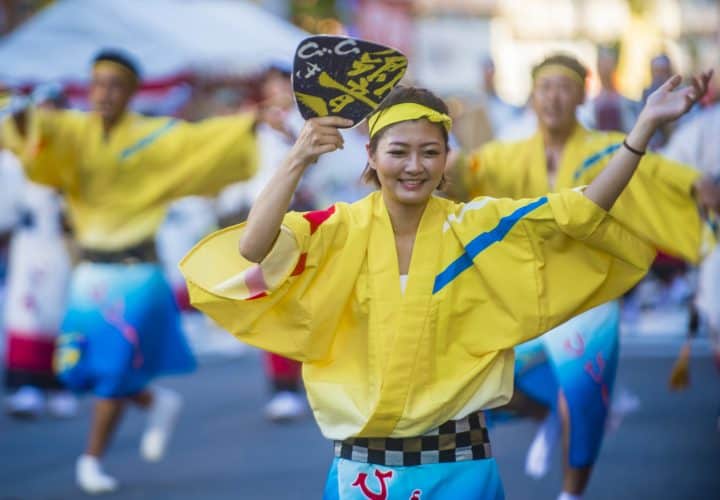 Almost every town and village in Japan has their own version of the obon festival. But you’ll notice something different in Tokai City. Their bon odori dance is completely silent!

It didn’t used to be that way: Tokai residents once partied with drums, flutes and whistles like elsewhere in Japan.

But after one too many noise complaints from the elderly locals, town officials came up with the idea of a silent festival in 2009. Now, festival-goers enjoy the traditional obon music through headphones.

It might seem like one of the silent discos that are popular in the west, but the dance moves are still classic Japanese folk dance!

You probably knew this one was coming. The Kanamara matsuri is Japan’s most famous fertility festival.

At this event – like many other Japanese celebrations – festival-goers parade around a portable and holy shrine. It just so happens that this one is shaped like a giant penis.

Yes, please stop giggling there at the back. This is actually a religious festival with a serious meaning. Traditionally, sex workers came to the Kanamara shrine to ask for protection from sexually transmitted diseases.

Today, the festival promotes LGBT rights and raises a lot of money for HIV research. It is also well-attended by women hoping to have a baby.

This festival has been getting a lot of publicity in recent years, for obvious reasons. Each year it gets bigger and better.

This is also the perfect place to get your hands on all kinds of penis-shaped souvenirs, from candles to lollipops!

When: The first Sunday in April

Were you a pig in a past life? Do you ever feel like a cooling mud baths in the middle of a hot summer? If so, this is the Japanese festival for you.

Yep, this mucky festival is all about rolling around in the mud. This is supposed to bring health for the year ahead!

During this festival in Ageo City, Saitama, teams of men visit local houses carrying a small portable shrine called a mikoshi. At each house, the family sprinkle the visitors with water. Sure enough, things soon become pretty muddy. The men roll the shrine around in the mud for good luck.

I hope the shrine doesn’t get too slippery, because later on it’s used as a stage for acting out dramas.

Nabe means cooking pot, and kanmuri means crown… so you guessed it, this festival is all about wearing pots on your head.

In this eccentric festival, eight-year-old girls parade through the town to the shrine wearing cooking pots as a hat.

The festival is held at Chikuma Shrine on the shores of Lake Biwa, Japan’s biggest lake. The shrine is dedicated to the god of food. The nabe pot symbolises offerings of food to the god.

The girls also wear traditional red and green outfits called kariginu. Luckily for them, the pans are only paper replicas – real clay nabe cooking pots can be heavy!

For two days every summer, local people take to the streets to celebrate the humble belly button. The highlight is a belly button parade. Dancers in the parade paint their stomachs to look like faces.

The look is completed with a kimono worn from the waist down, and a huge hat worn to cover the real head. The effect is like a huge painted doll.

The idea of painting the belly like a face is actually pretty traditional in Japan. There are other belly button festivals around the country, notably in Furano, Hokkaido.

Of course, the festival wouldn’t be complete without its very own belly button song… and a lot of beer.

When: Fourth Friday and Saturday in July

What do you think? Have you ever attended any Japanese festivals? Let me know in the comments! 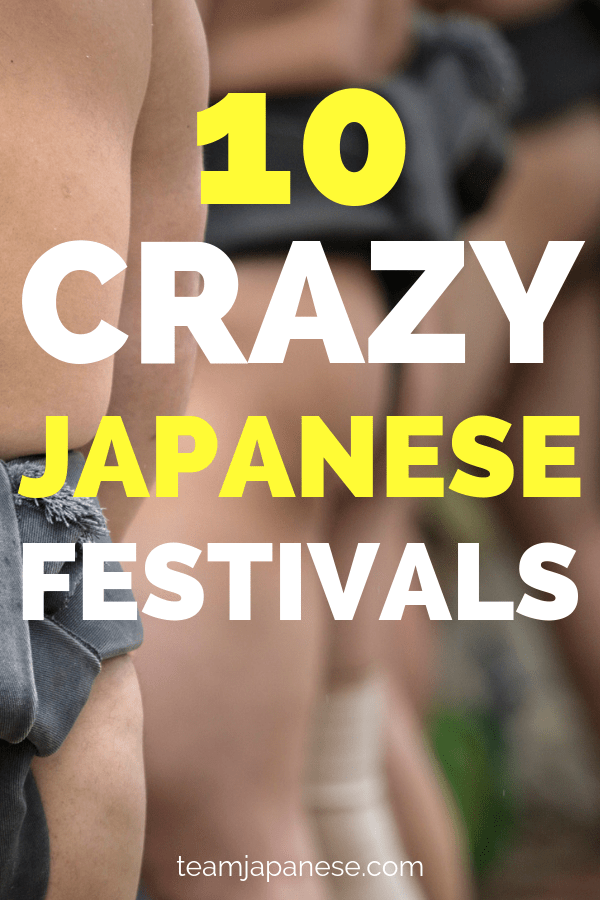