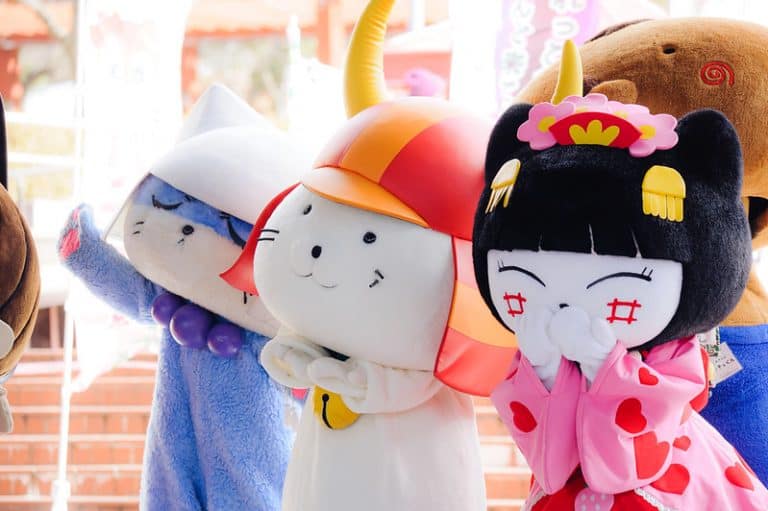 Team Japanese uses affiliate links. That means that if you purchase something through a link on this site, we may earn a commission (at no extra cost to you).
118 shares
LIMITED TIME OFFER!

Japan is no stranger to the cute, weird, and all things in between. With the popularity of kawaii culture, Japanese mascots or yuru-kyara (ゆるキャラ) became part of the fun and quirky side of their culture!

These mascots are designed to be cute, strange, or even something straight out of a nightmare. Yuru-kyara often make appearances in events and campaigns, promoting tourism, advocacies, companies, and products.

Japanese mascots are so popular that some even have their own backstories, merchandise, and social media. The Yuru-kyara Grand Prix is an annual event in which thousands of mascots from all over the country compete to be the mascot of the year. How cool is that?

The term yuru-kyara was coined by an illustrator named Jun Miura when mascot popularity rose in the early 2000s. The term comes from yurui (緩い), which means ‘loose’, ‘gentle’ or ‘relaxed’, and kyara (キャラ), which means ‘character’.

Gotōchi-kyara (ご当地キャラ) or ‘local character’ is a term that refers to mascots that promote cities or prefectures. The majority of yuru-kyara fall under this category.

Japan’s cute characters often come in illustrated, or animated form, but yuru-kyara are typically presented as kigurumi (着ぐるみ). They are actors who don cartoon character costumes to perform at events, shopping malls, or theme parks like Disneyland.

How popular are mascots in Japan?

Since the boom in mascot popularity, municipalities started to create their own characters to boost tourism. One example is Hikonyan, the Hikone castle mascot. In fact, yuru-kyara got so popular that the government decided to regulate municipal spending on making them.

Not only did mascots encourage tourists to visit, but they also gained a lot of fans! Mascot-themed merchandise sales amounted to 16 billion dollars in 2012. A number of popular yuru-kyara like Kumamon have their own social media and YouTube channel.

Fans of yuru-kyara also formed an otaku subculture for it. Mondo Mascots is a popular blog that posts about all sorts of Japanese mascots on their website and Twitter account.

The Yuru-kyara Grand Prix is an annual competition that gathers mascots from different parts of Japan. Over one thousand mascots meet every year, and people must vote for their favorite. That doesn’t include the ones that chose not to join the Grand Prix, so there are more mascots in Japan than we think!

As more regions, businesses, and individuals embraced yuru-kyara, former mascot actor Choko Ohira founded the Choko Group Mascot Actor’s School in 2005. They train mascot actors on how to move, dance, and interact with people in their mascot persona.

Is there a cultural significance to the mascot craze? Although the Japanese are generally not too keen on physical affection, yuru-kyara carry a very approachable nature. Their fluffy and friendly image appeals to people of all ages.

Mascots don’t usually speak, but they express and radiate warmness through their movements and body language, so it’s no wonder they became so popular. Let’s get to know some of the cutest Japanese mascots!

Kumamon is a jolly black bear, and is one of the most recognizable mascots worldwide! Since debut, it has amassed a large social media presence and has its own YouTube channel. Kumamon is also the winner of Yuru-kyara Grand Prix in 2011 and earned billions of yen for its home prefecture.

This Japanese mascot is a pear who likes peaches! Funassyi was created by a random citizen and was eventually declared an official representative of the city.

It likes heavy metal music and unlike other mascots, Funassyi likes to headbang, scream, and jump around. Not to mention, it also has an anime and makes its own music. Seems like one of the coolest mascots around!

Chiitan is a very cute baby otter. It wears a pink turtle hat and causes mischief. Chiitan can often be seen wreaking havoc around the city by playing pranks. Its mischievous deeds made it famous on social media, however, Chiitan is often criticized negatively for its activities. Nevertheless, many people still adore this funny mascot!

Created for the 400th anniversary of Hikone castle, Hikonyan is one of the most popular yuru-kyara. It is based on the story of a white cat who saved the third lord of Hikone. The said cat led the lord into a temple before a huge storm came. Hikonyan also wears a samurai hat to mark its roots.

Arukuma is a cute, green bear who wears a red apple headdress and backpack. This bear won the Yuru-kyara Grand Prix 2019. Apples are one of Nagano’s popular products, and sometimes, Arukuma wears headdresses of other products like mushrooms, or soba noodles.

This mascot is an adorable brown pony with a green hat. Gunma-chan was originally created as Yūma-chan in 1994 in a sports competition but was redesigned and renamed to Gunma-chan in 2008. It has its own anime which is broadcasted in its home prefecture.

This kawaii character is a white fairy mascot with ears modeled after pine trees. Yume-chan represents the city that was washed out after the 2011 tsunami, and was created to help in reconstruction.

The star on her forehead guides residents and children to safety, while her bag contains dreams and happiness. Yume-chan is the winner of Yuru-kyara Grand Prix 2020.

This Japanese mascot is a samurai who wears a ramen noodle bowl hat and carries imo-furai (deep-fried potatoes on skewers) as swords. Sanomaru also wears a hakama skirt and sandals. It has large, kawaii eyes that captured the hearts of many. Sanomaru won the Yuru-kyara Grand Prix 2013.

Like other yuru-kyara, Bary-san is covered in symbols that represent its city: this adorable round chicken wears a towel around its waist and carries a ship to represent Imabari’s two major industries, and wears a crown shaped like the famous Kurushima-Kaikyō Bridge. Bary-san was the 2012 winner of the Yuru-kyara Grand Prix and speaks exclusively in the local dialect, Iyo-ben.

This adorable open-mouthed brown mascot represents NHK (Nippon Hōsō Kyōkai), Japan’s national broadcaster. Its name was taken from “dōmo, konnichiwa”. Domo-kun is another yuru-kyara who gained national and overseas popularity. He also has his own animated show!

Sweets company Fujiya debuted Peko-chan in the 1950s to promote their cake shop. This mascot of a young girl has been around for so long that it’s impossible to not recognize her! Peko-chan also has a boyfriend named Poko-chan, who was later created by the company.

Barney and Bigfoot who? Fuji TV’s mascots from popular children’s show ‘Hirake! Ponkikki’ are Gachapin, a green dinosaur, and Mukku the red yeti.

The show aired from the 1970s to 1990s, making these two mascots some of the most recognizable characters for locals. Until today, Gachapin and Mukku collaborate with games and animation studios locally and internationally.

Japan’s creativity shines in many ways in the yuru-kyara world. Nazo no Sakana or ‘Mysterious Fish with Legs’ is an example of that! This weirdly cute mascot represents the Chiba Lotte Marines baseball team and exhibits its different transformations on the field.

One minute, this big, blue angler fish is sporting its legs, and the next moment a fish skeleton is crawling out of its mouth and tumbling across the stadium. What a show!

Miraitowa is the official mascot for the Tokyo 2020 Summer Olympics while Someity represents the Paralympics. Both mascots have superpowers like teleportation and telepathy.

They were designed to appeal to young children as well as embody Japanese culture and tradition. Miraitowa’s appearance is influenced by samurai elements while Someity has a prominent cherry blossom-inspired design.

Even the police forces have their own mascots! Pipo-kun is Tokyo Metropolitan Police’s fuzzy orange mouse. His design includes an antennae and big ears that help him spot any sort of trouble occuring in the city.

Pipo-kun advocates for peace and security along with police officers, even joining them on motorcades. He also has his own theme song!

Who would’ve thought that this cute orange mascot was designed to bring brightness to a prison? Wakayama Prefecture’s adorable Waka-pi is inspired by mandarin oranges, which is a popular fruit in the region.

So there you have it! Just a few of the thousands of cute and weird yuru-kyara in Japan. Do you know any other Japanese mascots? Which is your favorite? Share in the comments below!