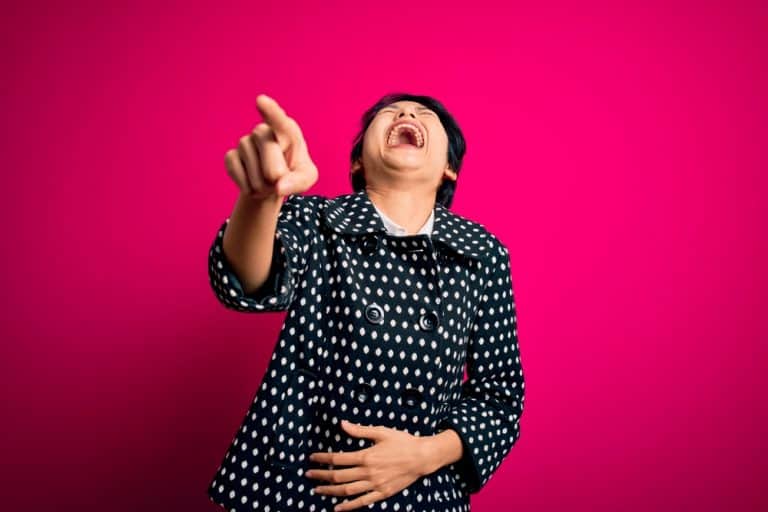 Team Japanese uses affiliate links. That means that if you purchase something through a link on this site, we may earn a commission (at no extra cost to you).
51 shares
LIMITED TIME OFFER!

Ever wondered how to crack a joke in Japanese? The majority of Japanese jokes are based on wordplay (kotoba asobi / 言葉遊び) and puns (dajare / 駄洒落) and if you’re able to say one smoothly, you’re sure to impress even the most stoic of your friends!

Why are wordplay jokes so popular in Japanese? They are simply easy to make because the Japanese language has so many homonyms: words that sound the same but have different meanings and different ways of being written. For example, the word kiri can mean ‘fog’ (霧), ‘drill’ (錐), ‘end/limit’ (切り) among other things.

But remember, being able to use tone of voice and keep a straight face are just as important as the joke itself!

Some Japanese joke vocabulary to take note of:

Dajare are old-fashioned Japanese puns from the Showa era which were once a form of high-class entertainment! Nowadays, they’re considered so bad that they’re funny.

Dajare can bring a smile to anyone’s face if you say them at the right moment. On the other hand, they can also bring that long silence… *crickets*

Yes, dry, dad-jokes exist in Japanese too! Known as oyaji gyagu (literally ‘middle-aged man jokes’), these are a subcategory of dajare which use homophones (words with the same sound but different meanings).

Rakugo is a form of verbal comedy known as yose (spoken theater) which is over 400 years old and was popular in the Edo period.  People who perform rakugo are known as rakugoka / 落語家 and they perform comic storytelling alone on a stage, in a kimono, seated on a cushion with minimal props.

Now go and test the water with these Japanese puns, sure to get a reaction, whether good or bad! Lol!

This classic Japanese joke is a play on the word arumikan: the short form of the word aluminum can in Japanese.

If you separate the word arumikan into two parts: aru / mikan you get aru which is the verb ‘to exist’ (for inanimate objects) and mikan, which we all know means ‘orange’ in Japanese.

So there is your pun: arumikan (aluminum can) and aru mikan (there is an orange).

What does it mean in English?

‘There is an orange on top of an aluminum can’.

Another famous dajare is a play on the Japanese words for a panda bear (パンダ / panda) and ‘bread’ (パン / pan).

As many of you will know, the word da in Japanese means ‘it is’. Therefore when you say パンだ /  pan da you are also saying ‘it is bread’.

Pun: Rakuda means ‘camel’ and ‘it is relaxed’.

Meaning: The camel is relaxed!

Meaning: This curry is spicy/hot!

Note: Making i-adjectives more emphatic and masculine in Japanese is done by changing the -i to an -e so the adjective karai (spicy) becomes kare.

Meaning: The fly is fast!

Pun: In Japanese the phrase maa, ikka means ‘it’s okay / nevermind’. Try saying it out loud right now and it sounds like ‘my car’ with a Japanese accent (maii kaa)

Pun: Mushi is the Japanese noun for insect/bug (虫) and also the verb for ‘ignore’ which is mushi suru (無視する).

Meaning: The bugs are really bothering me. What should I do?
Ignore them.

Meaning: What do you call a salmon that loves Japanese rice wine?

Pun: This is a play on the word tomato which is the same in Japanese (トマト). The response ‘wait a minute’ is chotto matte ite. If you change the word matte (wait) into matto it sounds like cho tomato ite!

Meaning: Do you want to eat a tomato?

Meaning: When do you want to eat the fish?
Hmmm… maybe in the morning.

Pun: Satou (砂糖) is the Japanese word for ‘sugar’ while the verb sattou (殺到) means ‘to flood’.

Meaning: At the sugar sale, it’s flooded with people!

Meaning: How can I reserve some oden?
By phone!

And to finish… a bonus joke told to me by a Japanese man at the airport in New Zealand while we were waiting for our flight.

Hokkaido no ichiban kita no machi no namae wakaru?
Wakkanai.

Pun: Wakanai (わかない) is the informal way to say ‘I don’t know’ in Japanese. When said emphatically (わっかない/wakkanai!), it’s pronounced exactly like the actual name of the Northernmost city in Hokkaido which is Wakkanai （稚内）.

Meaning: Do you know the name of the Northernmost city in Hokkaido?

What did you think of these funny Japanese jokes? Did they make you crack up, or groan and roll your eyes? If you think you can do better, please share your best Japanese jokes in the comments!

If you want to learn Japanese with humour, our top recommended course is JapanesePod101! It’s a lively, audio based course with hundreds of fun and casual lessons. It’s definitely the best resource for learning Japanese as it’s really spoken. And they’re even known to crack a joke or two!