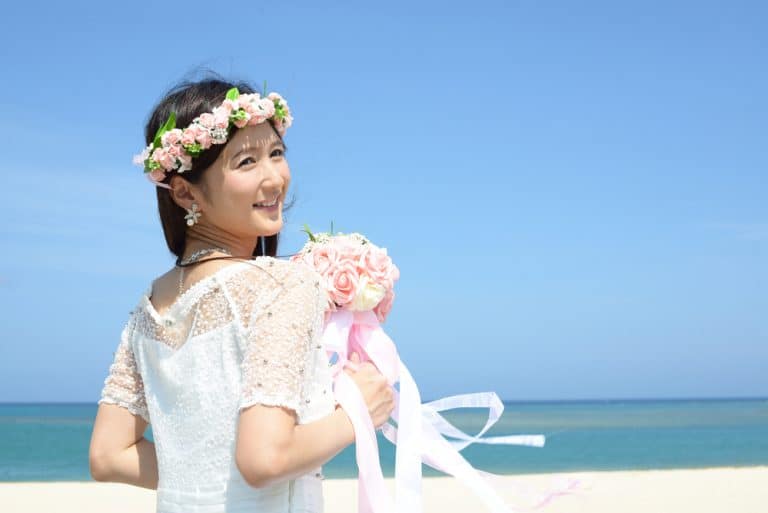 Team Japanese uses affiliate links. That means that if you purchase something through a link on this site, we may earn a commission (at no extra cost to you).
68 shares
LIMITED TIME OFFER!

Saying ‘wife’ in Japanese may not be as easy as 123. Husbands typically address their wives by their given name when talking to each other. But some words can only be used when talking about your wife rather than somebody else’s, and vice versa. There are also underlying nuances you must consider while choosing which word to use.

Several terms for ‘wife’ originated from gender biases in Japan’s history, so some people are sensitive to which ones they would like to use or hear. Let’s check out the multiple words for wife in Japanese.

You might hear okusan (奥さん / おくさん) a lot in daily conversations or Japanese media. Okusan is an honorific language or sonkeigo, therefore it is used to refer to somebody else’s wife. This also means’ ‘married lady’ or ‘madam’.

Okusan is one of the words that has a bit of a questionable background. The word oku (奥 / おく) means ‘back’ of the house. It implies that the wife belongs inside the house while the husband attends to work at the front or outside of the home. However, old Japanese nuances can fade over time.

At present, the etymology of okusan does not have a huge impact on its usage. Although many people dislike the meaning, okusan is still the most commonly used word for ‘wife’. If you are unsure what to call somebody else’s wife, okusan is your best option.

The kanji for tsuma contains the radical for ‘woman’, but there is no heavy gendered nuance unlike some words for ‘wife’.

The interesting thing about fujin (夫人 / ふじん) is that, as an archaic term, it was specific to wives of aristocrats.

Nowadays it is used as respectful language to connote that a married lady is of high social status. She may be the wife of a politician, company executive, or other famous figure.

Fujin can be used as an honorific suffix like -san (ex. Kishida-fujin, Obama-fujin). For formal situations or when you are unfamiliar with their name yet, you can say fujin-sama as well.

Pay attention: you might also come across the word pronounced fujin but written with the different kanji 婦人. Written this way, the word means ‘woman’ in Japanese, but not specifically a wife. It can sound a little dated and tends to be used to refer to older women or higher status women.

Kamisan (上さん / かみさん) is an informal way to say wife in Japanese. It is best used when conversing with friends or family. This term implies that the wife is very smart, strong, and responsible. When a husband uses this, it’s like they are honoring their wife.

This word also means ‘landlady’. In the past, kamisan was used to refer to the wife of a man who owned a local business, usually an inn. Running such establishments allowed the couple to live comfortably, hence the nuance of respect.

The implied higher status of the wife can also be found in the kanji ue (上), which means ‘above or ‘up’. This is just like the words hahaue (母上) for ‘mother’ and aneue (姉上) for ‘sister’. Although kamisan is typically written in hiragana only.

The word nyoubou (女房 / にょうぼう) is a common word for ‘wife’ used by older men (mostly ojiisan). This is used when talking about your own wife. Nyoubou has the same feel as ‘my old lady’ in English, which makes it an informal term.

In pre-modern Japan, court ladies who served the imperial family were called nyoubou. This word literally translates to ‘woman in the room’.  The chambers of the Emperor or imperial family where these women served is called bou (房 / ボウ).

The standard Japanese word for ‘mother’ is okaasan (お母さん / おかあさん), but it can also be used to call your wife if you are married with children. Sometimes the husband addresses his wife by okaasan to teach their children the proper way to call their mom.

Okaasan can also be used when talking about your wife to somebody else, or even as an endearment. The English loan word mama (ママ) is also used in the same manner.

Kanai (家内 / かない) is humble Japanese or kenjougo, so it is only used when you talk about your own wife. Polite Japanese is used when talking about somebody else’s wife.

This word might also be a little problematic to some. It consists of the kanji for house (家) and inside (内). Again, this is rooted in the word’s usage in old Japan, when men toiled in the fields while the women remained inside the house to perform chores and take care of the children.

There are also gender-neutral Japanese words to refer to one’s spouse. Haiguusha (配偶者 / はいぐうしゃ) can refer to either wife or husband.

However, this word is rarely used in daily speech. This is a legal term used in official documents or forms, like those you encounter in applying for a haiguusha biza (配偶者ビザ / はいぐうしゃビザ) or ‘spouse visa’

Tsureai (連れ合い / つれあい) is another gender-neutral word for spouse in Japanese. It can be interpreted as ‘person you travel with’ because of its meaning. Tsureru (連れる / つれる) means ‘to take (someone) along’ and au (合う) means ‘to come together’.

There is a rising preference for gender-neutral terms for one’s romantic partner among the younger generations now. A 2020 survey conducted by Huffington Post Japan revealed how people felt about the Japanese words for ‘husband’, which also have sexist implications (the survey is in Japanese).

Ideally, the majority of the respondents prefer either neutral terms (no sexist implications) or gender-neutral ones for wives to refer to their husbands. Tsureai is one of them. You may view an interpretation of the results in English created by Unseen Japan here.

Another popular gender-neutral term is paatonaa (パートナー), a loan word from the English ‘partner’.

The word yome (嫁 / よめ) alone means ‘daughter-in-law’, but it can also be used for ‘bride’. It is easy to get confused between yome and hana yome (花嫁 / はなよめ), which is more specific to ‘bride’.

Yome is used when talking about your daughter-in-law. You can also add uchi no (うちの) to indicate that you are speaking about someone in your family.

Another word for ‘daughter-in-law’ is giri no musume (義理の娘 / ぎりのむすめ). It can be used in polite conversations. When speaking to your daughter-in-law, however, you typically address them directly by their given name.