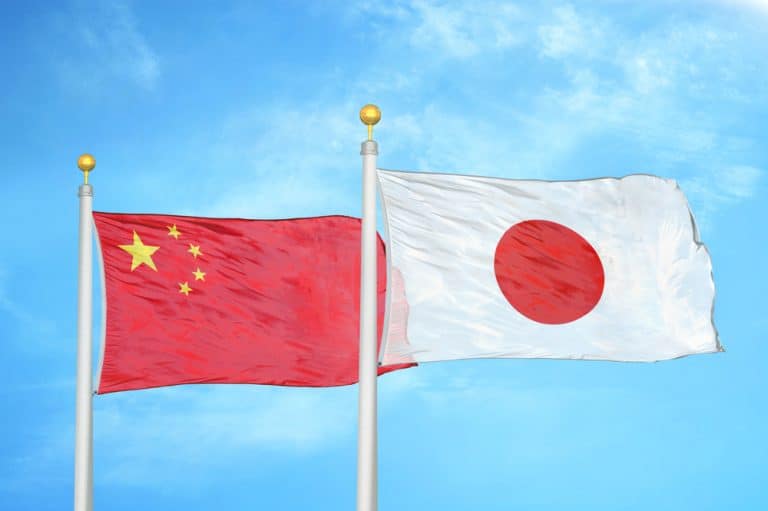 Team Japanese uses affiliate links. That means that if you purchase something through a link on this site, we may earn a commission (at no extra cost to you).
14 shares
LIMITED TIME OFFER!

So you might be wondering, what are some of the similarities and differences between Japanese and Chinese? When it comes to language, Japanese and Chinese both have complex writing systems with thousands of characters and they share a lot of vocabulary.

However, you might be surprised that the two languages have less in common than you think. Not only are they not in the same language family but Japanese has a very different grammar structure from Chinese and the pronunciation of the two languages couldn’t be more different.

In this blog post, we’ll take a closer look at the similarities and differences between Japanese and Chinese, their history and unique features, and which one might be easier to learn for beginners!

The history of Japanese and Chinese

Japanese and Chinese are two of the world’s most ancient languages. Chinese is generally considered to be the older of the two languages, with Japanese first emerging around the 5th century CE.

Japan and other East Asian countries, including Vietnam and Korea, borrowed Chinese characters and adopted them into their language to be able to write.

As time went on, Japanese and Chinese developed independently from one another with their own distinct features. As an island separated from mainland Asia, the Japanese language naturally developed a unique writing system and grammar, as did the other countries borrowing from Chinese.

Today, Japanese and Chinese share fewer similarities, making it difficult for speakers of one language to understand the other.

However, their writing systems still share characters in common, so reading and writing each other’s languages tend to be easier for Japanese and Chinese speakers.

Japanese vs Chinese from a linguistic perspective

Considering Chinese and Japanese are not in the same language family, they are linguistically quite different!

Japanese is thought to be descended from a common ancestor with Korean, but it is still labelled a linguistic ‘isolate’ meaning that people who study languages have not yet been able to classify Japanese into a known language family.

Chinese, on the other hand, is a member of the Sino-Tibetan language family which includes other languages like Tibetan and Burmese.

Similarities between Japanese and Chinese

Japanese and Chinese share some similarities, mainly when it comes to writing.

Both Japanese and Chinese use ideographic writing systems (but Japanese also uses two other writing systems) which means that each character represents an idea or concept rather than a sound. These characters originated in China and were later adopted by the Japanese.

In Japanese, the characters are known as kanji while in Chinese they are called hanzi. Because Japanese kanji are derived from Chinese hanzi characters, many characters represent the same or similar concepts across both languages.

That’s why Japanese and Chinese speakers can sometimes understand or guess the general meaning when reading each other’s written language, even if they can’t speak the other language or correctly sound out the words.

Both languages also have a history of using honorifics to show respect. Honorifics are words used to address people politely, for example adding -san to the end of someone’s name in Japanese.

Honorifics originated in China due to class consciousness and Confucian ideals of order and respect. They were brought to Japan and influenced the development of the Japanese polite language (keigo).

Most Chinese honorifics have fallen out of use in the Chinese language, but they may still be understood by most Chinese speakers today because of the popularity of Chinese historical novels and television dramas that make use of language from the classical periods.

Differences between Japanese and Chinese

Firstly, Japanese is written with three different scripts – hiragana, katakana, and kanji – while Chinese is only written with hanzi (Chinese characters).

When sentences are written in Japanese, a combination of all 3 writing systems is used. Hiragana is used for constructing native Japanese words while katakana is used for foreign words.

In Chinese, hanzi is used to represent words while in Japanese, kanji can represent both words and syllables.

Not only that, but the pronunciation of each kanji character in Japanese has two different readings: kunyomi (the Japanese reading) and onyomi (the Chinese reading). This makes Japanese particularly confusing for Chinese speakers.

The simplified characters were created in the People’s Republic of China to make the written language easier to learn for people who couldn’t read or write.

Another difference between Japanese and Chinese is the ordering of words in a sentence (known as syntax).

Japanese also has a smaller number of sounds than Chinese, and it mainly uses phonetic writing – each character represents a sound equal to or shorter than a syllable (known as a ‘mora’).

In contrast, Chinese has thousands of characters that represent whole words or concepts, rather than individual sounds.

Lastly, pronunciation is a major difference between Japanese and Chinese. Chinese is an entirely ‘tonal’ language which means that the same word can have different meanings depending on how it’s pronounced. This means Chinese has a larger number of unique sounds than Japanese.

For example, Mandarin Chinese has four different tones (flat, rising, falling-rising, and falling) which can change the meaning of a word entirely.

The Japanese language, on the other hand, is not tonal. Japanese has a simpler sound system with only five vowel sounds and fourteen consonant sounds and uses something called a ‘pitch accent’.

The Japanese pitch accent is either a rising or falling intonation unlike the 4 tones in Chinese. Pitch is different to tone because it refers only to a high or low sound while tones are more variable which is why Chinese is more vocal/musical and sounds so different to Japanese.

Pitch is important in Japanese speech because Japanese has a lot of homonyms – words that have the same pronunciation but different meanings.

So which language is easier to learn?

So what’s the verdict? Is it easier to learn Japanese or Chinese?

It depends on your native language and which features you find more challenging. Your experience learning languages is also a big factor. You will have to consider what makes a language hard for you – is it writing, speaking, reading?

Between the two languages, many people would argue Japanese is harder to learn because there are 3 different writing systems to master and the use of both Japanese and Chinese readings for characters. But Chinese characters are complex, and it is extremely challenging to speak Chinese if you don’t have experience with tonal languages because you have to learn to pay attention to constantly changing the pitch of your voice when speaking.

Therefore if you are a native English speaker, learning to speak Japanese may be easier because of the pronunciation – there are more than half as many sounds in Japanese as there are in English. But if you are a speaker of a tonal language, learning to speak Chinese may be easier because you have experience changing tone of voice to convey meaning.

However, if you are not familiar with East Asian languages or Chinese characters at all, then learning Japanese and Chinese is going to be equally difficult because you have to learn a new writing system. This is particularly true if you are a speaker of a language that uses the Roman alphabet like English, French, Spanish and so on.

Which do you think is more difficult? Japanese or Chinese? Let us know in the comments below.