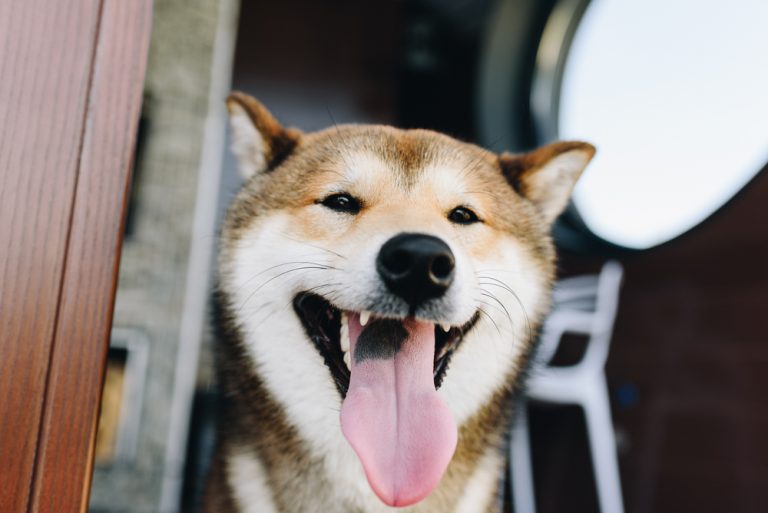 Team Japanese uses affiliate links. That means that if you purchase something through a link on this site, we may earn a commission (at no extra cost to you).
259 shares
LIMITED TIME OFFER!

Feeling like your Japanese learning is getting a little ho-hum? Let’s take a break from all the grammar and daily vocabulary. The best part of learning a new language is the funny words!

Some of these Japanese words and phrases have a funny sound, or mean something funny when translated into English. There are a few that aren’t just funny, but are also helpful when used in appropriate situations!

You might encounter some of these funny Japanese words on the internet as slang, in YouTube videos, or anime. Let’s get to the LOLs!

We all have that friend who has such a large appetite, they might as well have betsubara (別腹 / べつばら)! The kanji for this funny Japanese word is composed of the characters for ‘extra’ (別) and ‘stomach’ (腹).

These kinds of people usually have room for dessert even though they just had a full meal beforehand. Impressive!

Now this sounds like an old-school boy group, but bākōdō jin (バーコード人 / バーコードじん) actually refers to balding men with weird comb-overs. They’re so badly done that they resemble a barcode, hence the term ‘barcode men’.

Yes… well, kind of. Yoko meshi (横飯 / よこめし) literally translates to ‘horizontal meal’, but it’s a word that describes Western food! Think hamburgers and sandwiches, which are very popular choices in American fast food chains. It has also come to have some other meanings, including eating with foreigners, and talking in a foreign language while eating.

Now this is something we can all relate to. Kuchi sabishii (口寂しい / くちさびしい) means you’re eating not because you’re hungry, but rather because your mouth is lonely! It makes perfect sense when you think of it as craving for a certain food.

The literal translation of neko baba (猫糞 / ねこばば) is ‘cat feces’. Much like how cats bury their poop in the dirt or litter, neko baba is used when one does something bad and tries to hide it. For example, stealing.

Neko baba can be used in a joking or lighthearted way, as well! Like when your sister fools you by sneaking a couple of chips from your snacks.

An adult who lives with their parents

A ‘parasite single’ or written in katakana as parasaito shinguru (パラサイトシングル) refers to a full-fledged adult earning enough to live on their own, but still chooses to live rent-free with their parents.

Usually, these are people in their thirties and above. Their lifestyle is akin to that of parasites who live off of their hosts.

What’s recognized as the ‘canthus’ in English is called ‘eye butt’ when literally translated from Japanese. Me (目 / め) means ‘eye’ while shiri (尻 / しり) means ‘butt’. The canthus or ‘eye butt’ is the outer corner of the eye.

The opposite, or inner corner is called megashira (目頭 / めがしら) or ‘eye head’. It’s like the eye is a whole different body!

The word hanakuso (鼻くそ / はなくそ) literally means ‘nose sh*t’, and that’s pretty much what boogers are like. Another similar, funny word that refers to snot or mucus is hanamizu (鼻水 / はなみず) which means – you guessed it, ‘nose water’. Perhaps this ‘gross’ vocabulary can come in handy when you’re down with a cold?

Drink responsibly, or else you will get a hangover! The Japanese word for this is futsukayoi (二日酔い / ふつかよい), and when translated literally, it means ‘drunk for two days’! This accurately describes the feeling of a hangover, right?

Having a heated debate

When you hear two people debating passionately about something, their speech sounds very strong. To our ears, it can sound like kan kan gaku gaku (侃侃諤諤 / かんかんがくがく)! This four-character compound refers to outspoken people, or those having a heated discussion.

Another four-character compound that sounds funny in translation is hen tai kyaku shutsu (変態百出 / へんたいきゃくしゅつ). It refers to a person who looks different every time you see them. They might dress a certain way today and look like a complete stranger tomorrow! You’d wonder if they were a magician or just own an impressive wardrobe.

Aka no tanin (赤の他人 / あかのたにん) translates to ‘red stranger’. It means someone who is a complete stranger to you, with absolutely no connections to your life.

The color red is typically associated with danger, for example, when encountering a person you totally don’t know in a sketchy situation.

Have you ever found someone or something so cute, that you’d want to put them in your eye? But that will hurt! The phrase me no naka ni iretemo itakunai (目の中に入れても痛くない / めのなかにいれてもいたくない) is never taken literally, but it is said to show how much you adore someone’s cuteness.

For example, this can be used when meeting your infant niece or nephew and they are the cutest sight to behold. Or going to a dog cafe to interact with adorable pups!

I’m growing calluses in my ear

Someone’s constant nagging can get so tiring, it feels like grating in your ears. Mimi ni tako ga dekiru (耳に胼胝ができる / みみにたこができる) means ‘I’m growing calluses in my ear!’. This is used when you are tired of hearing the same words over and over again.

The phrase jigoku ni hotoke (地獄に仏 / じごくにほとけ) is translated as ‘Buddha in hell’. It refers to someone who can help you during the most difficult times.

There is a significant amount of Buddhists in Japan. Famous writer Ryuunosuke Akutagawa’s short story ‘The Spider’s Thread’ (Kumo no Ito) tells the story of a man named Kandata, who is trying to escape hell. Buddha sees him and recalls how he saved a spider’s life once, and decides to give him a chance at redemption by letting down a spider’s thread to pull him up.

A lot of onomatopoeia sounds pretty funny. Barabara (バラバラ) is a word for disorganized, chaotic, and scattered things or scenarios. For example, crowds at a festival can be described as barabara. It’s also the sound of raindrops hitting a surface.

Yes, just w. It is the same as ‘LOL’ in English. One visit to the Japanese side of social media, and you’re likely to find a lot of w’s!

This Japanese internet slang comes from the word warai (笑い / わらい), which means ‘laugh’. Some just shorten it to wara (笑 / わら) instead. Another funny thing is that people type kusa (草 / くさ), the kanji for ‘grass’ to say ‘hahaha’. Why? Because a series of w’s look like grass: wwwww

There’s no shortage of funny words and phrases in Japanese, so we’d love to hear more! Share your favourites in the comments 🙂

Has this article inspired you to start learning Japanese? You can find free online Japanese lessons here and you can download a free Japanese writing workbook here.