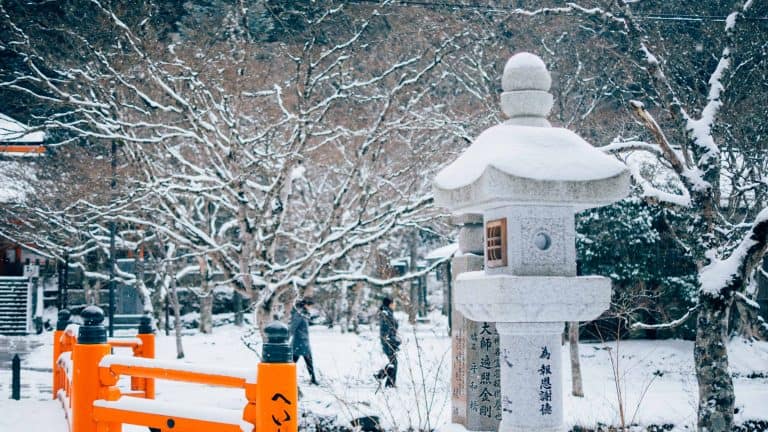 Team Japanese uses affiliate links. That means that if you purchase something through a link on this site, we may earn a commission (at no extra cost to you).
24975 shares
LIMITED TIME OFFER!

And whether you’ll be spending this winter in Japan or abroad, there are lots of beautiful Japanese words for the winter season that you should know.

Perhaps you already know that Japan has a lot of seasonal words. In Japan, people love to observe the changing seasons with seasonal foods, activities and festivals.

I’ve included lots of words related to the New Year, because New Year is the major winter celebration in Japan (similar to Christmas in Western countries).

If you know any other good winter words, share them with us in the comments! 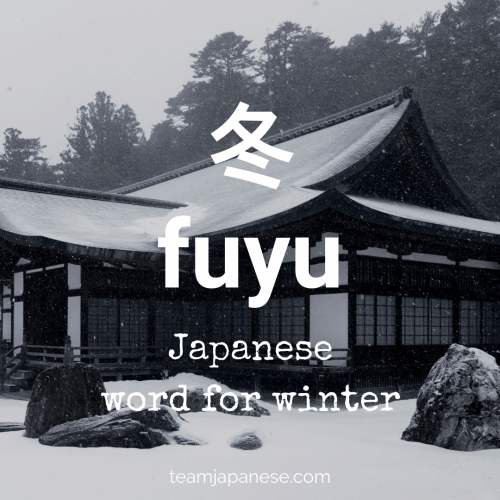 Let’s start by learning how to say winter in Japanese! Fuyu is the Japanese word for winter. It’s one of the four seasons in Japan. The other Japanese seasons are haru (spring), natsu (summer) and aki (autumn). 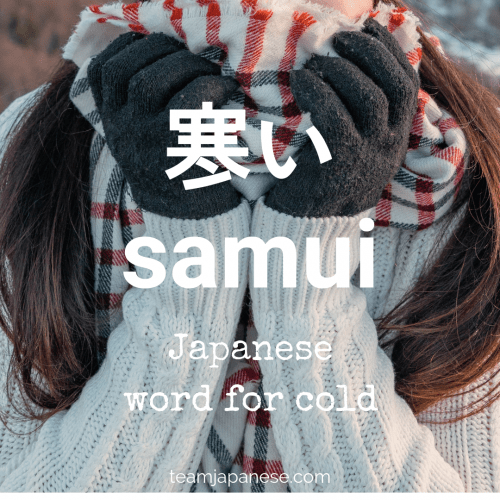 Samui means cold in Japanese – and it is one of the most useful Japanese words for winter! If you’re in Japan during the winter months, you will hear almost every conversation start with samui desu ne – cold, isn’t it! 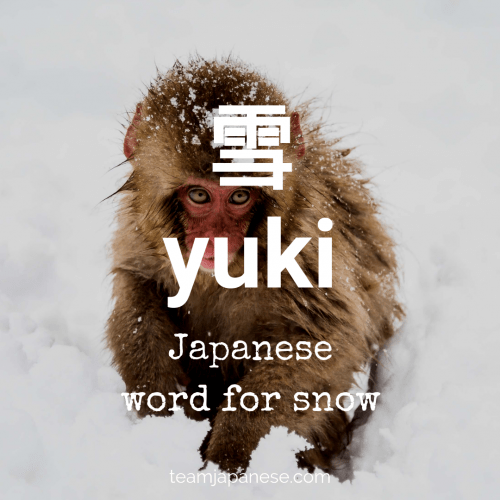 Yuki is the Japanese word for snow. Snow is a symbol of winter in Japan, the same as many other northern hemisphere countries.

Japan is a large country with several different climates, so it doesn’t snow everywhere in Japan. The northern regions (especially Hokkaido) can be covered in snow for several months each year. But other parts of Japan (especially south of Tokyo) rarely see snow. Still, snow is a popular theme for winter cards, art and decorations.

Here are a few other snow related words in Japanese for you: 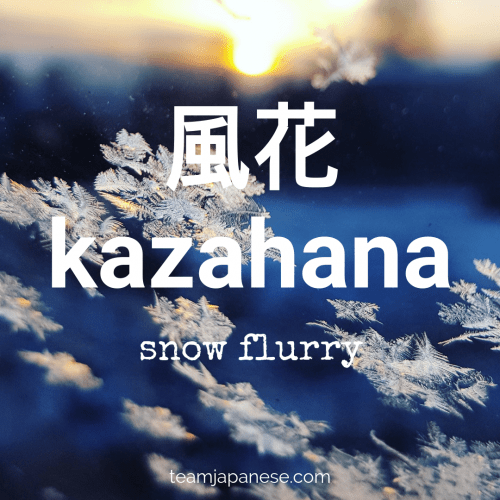 Kazahana is the Japanese word for snow flurry. If you are studying kanji, you might recognise the two characters that make up this word – 風 (kaza, wind) and 花 (hana, flowers). So a flurry of snowflakes is like little white flowers drifting in the wind. What a romantic image! 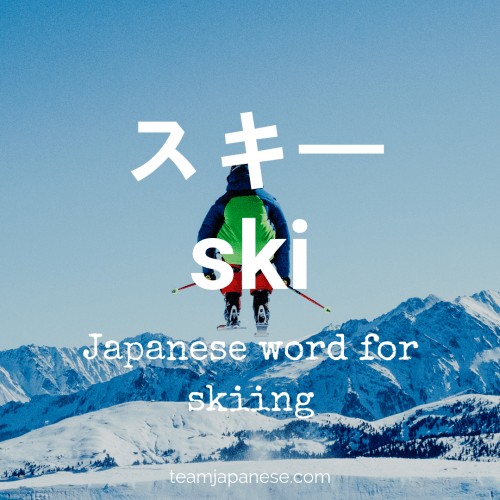 Skiing is a popular winter hobby in Japan. The Japanese word スキー (ski) has been borrowed from other languages, so it’s easy to remember! It is written in katakana – the Japanese script used for foreign loan words.

There are lots of famous ski resorts in Japan, and it’s becoming a popular ski destination for foreign tourists in recent years. 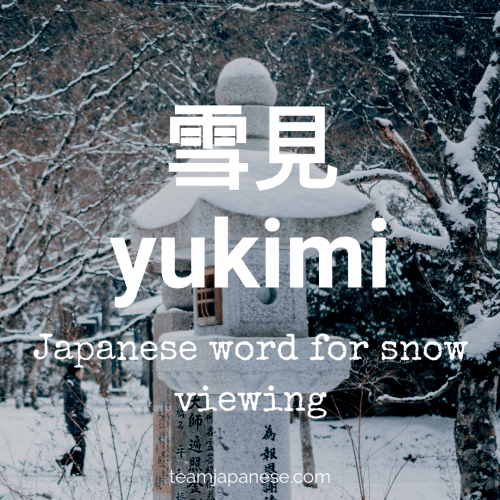 If you already know something about Japanese culture, you probably know that in Japan, people love to honour the changing seasons with different rituals that celebrate nature.

Maybe you’ve heard of hanami – the spring time tradition of going to view the cherry blossoms. Well, yukimi means viewing the snow! Japanese people will often take the time to drink tea while admiring the snow. 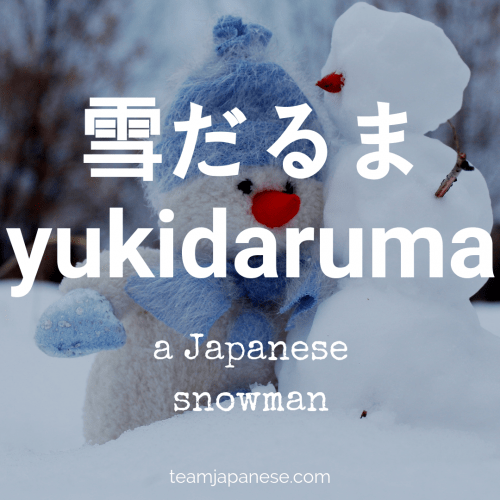 Yukidaruma means snowman in Japanese. Just like any other country, children love to build cute snowmen when it snows.

The first part of the word, yuki, means snow. The second part, daruma, is a kind of round Japanese doll. Yukidaruma do look more like a ‘daruma’ than a ‘man’!

As well as snowmen, Japanese children love to make yukiusagi – snow bunnies! Usagi means rabbit in Japanese. Yuki usagi are smaller and easier to make than snowmen. Usually they are decorated with red berries for eyes and green leaves for ears. 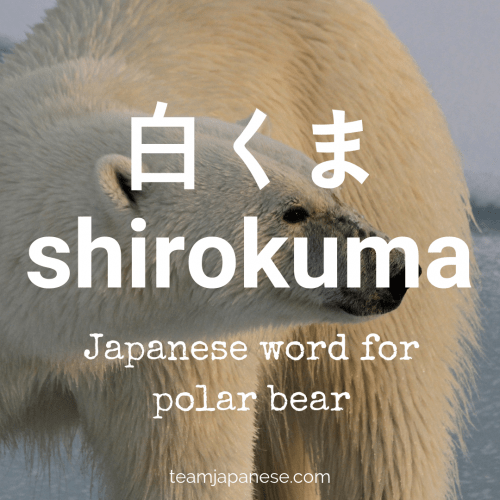 Shirokuma means polar bear. Literally, it means white (shiro) bear (kuma). There aren’t any polar bears living in Japan, but a lot of people love them because they look cute, so they are kind of a symbol of winter and snow. 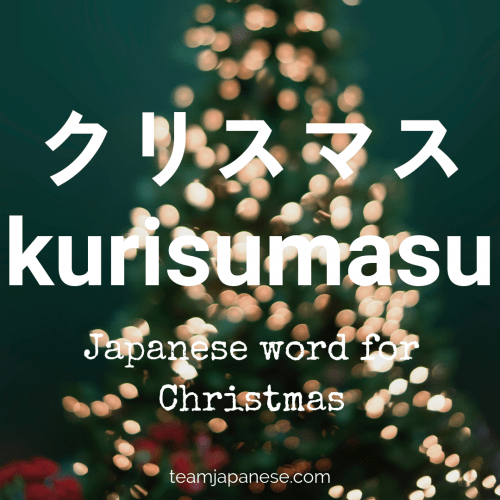 Christmas is not a big event in Japan because the country does not have a big Christian population. In fact, December 25th is a normal working day.

And it’s not considered a family day like in other countries. Christmas (or more especially, Christmas Eve) are actually thought of as romantic days in Japan! Christmas Eve is the hottest date night of the year – similar to Valentine’s day.

However, lately celebrating a western-style Christmas is becoming more and more popular in Japan, especially among families with young children. 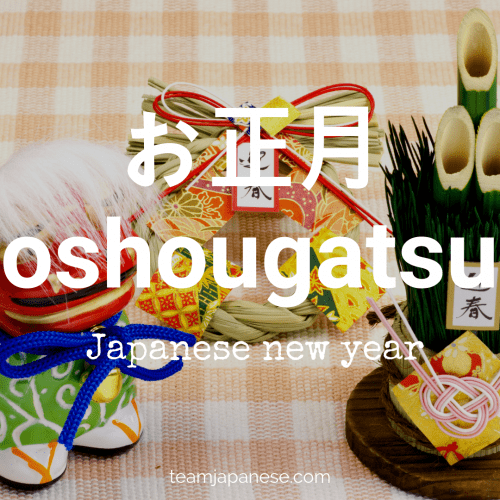 Oshougatsu is New Year in Japanese. As we mentioned, New Year is much bigger than Christmas in Japan. In fact, many people consider it to be the most important holiday in the year. A new year represents a fresh start, and new hopes for the year ahead.

Most companies in Japan are closed from January 1 to January 3, and sometimes longer, to allow employees to spend time with their families.

The New Year period is typically a family time in Japan, with lots of traditions and special food.

Here are some other words associated with the New Year in Japan:

Learn how to say ‘Happy New Year!’ in Japanese here. There are actually different greetings, depending on whether you say it before or after the new year! 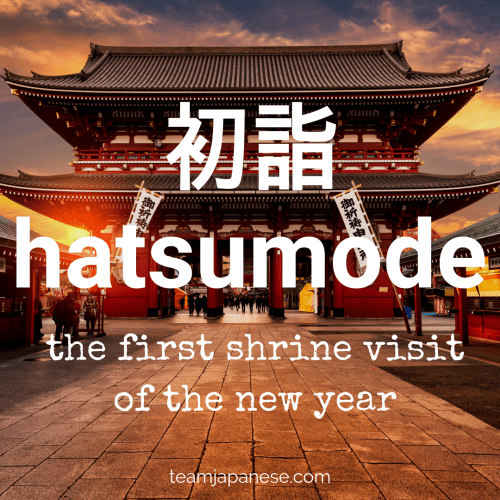 Hatsumōde is an important New Year tradition in many Japanese families. It means the first visit to a shrine or temple in the New Year. Many people try to go on January 1st, but any time in the first three days is OK.

Due to this tradition, Shinto shrines in Japan are extremely busy in early January. Many of them have a kind of festival feel, with food stalls outside and lots of activity.

During hatsumode, people buy omikuji (pieces of paper with fortunes written on) and pray for their wishes for the next year. 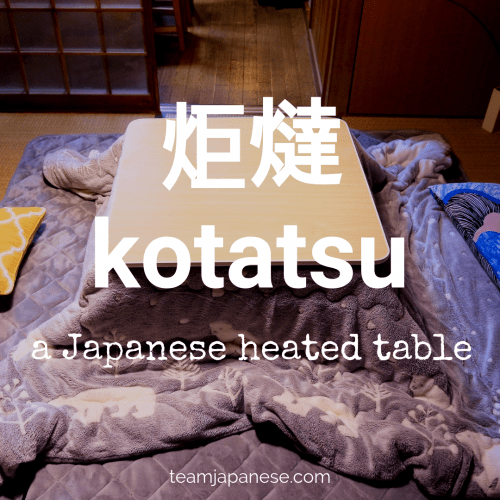 If you’ve ever spent a winter in Japan, the kotatsu will be your best friend! A kotatsu is a low table with a heater underneath. You can sit around it to keep your legs warm and toasty in the cold weather. They usually have a blanket attachment to keep the heat in, and for extra coziness.

Most Japanese homes don’t have central heating, so the kotatsu is an important way to stay warm in winter! Usually the family will all gather around the kotatsu and hang out on cold evenings. 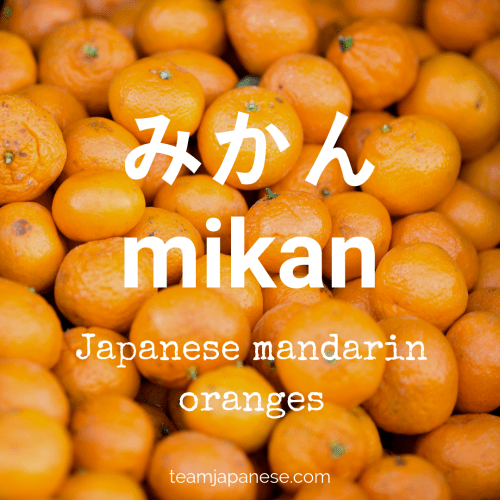 Mikan are Japanese mandarin oranges. They are a common winter fruit in Japan. They are grown in the south of Japan, especially Ehime prefecture. It has lots of vitamins and keeps people healthy in winter.

Japanese people especially love to enjoy mikan while sitting around the kotatsu!

Here are some other winter foods in Japan: 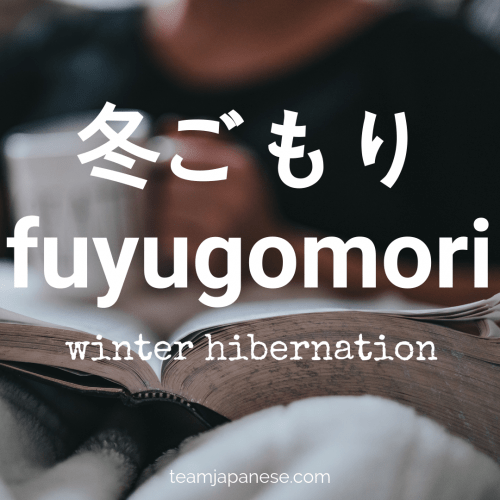 Do you like to escape from the world and stay indoors all winter? If so, you’re taking part in fuyu gomori – winter confinement or hibernation! The kotatsu is the perfect place for fuyu gomori 🙂 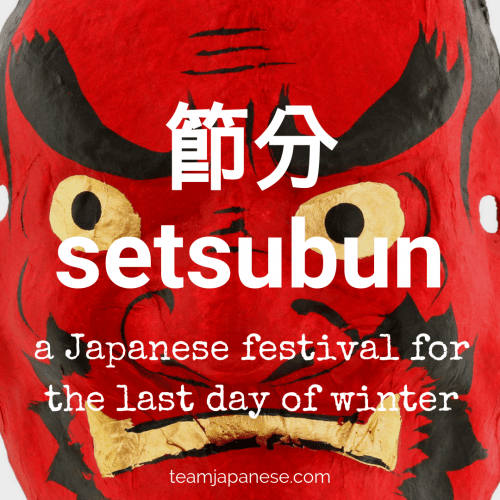 Setsubun is considered the last day of winter and beginning of spring in Japan. It takes place on February 3rd.

On setsubun, many Japanese families take part in a tradition to scare away evil spirits before the new season starts. For this tradition, the father of the household dresses up in a demon mask and comes to the front door of the house. The other family members throw soy beans at him, shouting 鬼は外! 福は内! (Oni wa soto! Fuku wa uchi!), which means ‘Demon out! Luck in!’, to chase him away. This is supposed to bring happiness for the new year.

Some people also attend a shrine on this day, or eat a special sushi roll called ehō-maki facing a lucky direction.

Do you know any more winter words in Japanese? Share them in the comments below!

Want to learn even more of the beautiful Japanese language? Get free lessons at my favourite online Japanese course here: