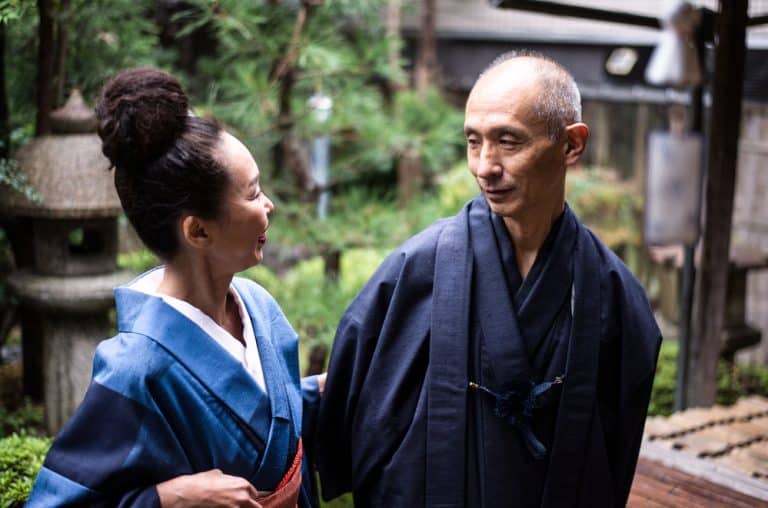 Team Japanese uses affiliate links. That means that if you purchase something through a link on this site, we may earn a commission (at no extra cost to you).
18 shares
LIMITED TIME OFFER!

Family is no doubt one of the most important things in any culture. For people who are getting married soon or already are (congratulations!), you might be curious about Japanese words for family members.

There are many ways to say husband in Japanese: otto (夫 / おっと) is the general term, but shujin (主人 / しゅじん) and danna (旦那 / だんな) are also common. The difference lies in whose husband the speaker is talking about. Additionally, the Japanese typically refer to their spouse by their given name or a nickname when speaking directly to them.

In the 21st century, more and more people are starting to prefer gender-neutral terms to refer to their romantic partners. One reason is the nuances and history behind the common words for husband in Japanese. Let’s go through them one by one!

Otto (夫 / おっと) is the general or standard word for husband in Japanese. This can be used in two ways: (a) to refer to somebody else’s husband when speaking in the third person, or (b) to refer to your own husband.

Talking about your own husband

Referring to somebody else’s husband in the third person

As shown above, one can use name-san no (○○さんの) to be specific about whose husband is being talked about. It is not usually necessary to use watashi no (私の) to refer to your own husband, because it is assumed you’re talking about your own husband if you don’t use a pronoun. However, you can say watashi no otto if you like for emphasis or clarity.

When encountering legal forms in Japanese, you might notice that otto (夫) is used in the ‘husband’ field. Due to its neutral meaning, otto is sometimes favored over shujin and danna, which have a bit of a patriarchal background.

Shujin (主人 / しゅじん) is a word that can be used to call your own husband. Historically, this used to mean ‘master’ or ‘head of household’. It contains the characters for ‘lord’/’master’ (主) and ‘person’ (人).

By itself, shujin cannot be used to refer to another person’s husband, unless you add the honorific prefix go- (ご～), which makes a word polite. This way, goshujin is appropriate for formal or polite situations.

Huffington Post Japan surveyed around 2,000 people for their opinion on the words they use to call their husband in different situations. Unseen Japan’s interpretation of the results showed shujin turned out to be the least popular. Why is that so?

There is an obvious gendered history behind this. Not only does shujin pertain to the ‘role’ of men as the breadwinner or provider, but it also implies that the wife is subject to her husband, like a servant. Hence the original meaning ‘master’.

This suggested power dynamic makes the word problematic for many Japanese people. It can also sound outdated in the 21st century.

Nevertheless, more married Japanese are finding alternatives to refer to their husbands if shujin doesn’t sit right with them.

As a polite term, danna (旦那 / だんな) is used when referring to somebody else’s husband. While doing so, it is best to add honorifics like -san (～さん) or -sama (～様 / ～さま) to be polite.

In informal situations, you can use danna when talking about your own husband around your peers. It’s more common to hear younger spouses use this term.

This word also has a gendered meaning behind it. In the past, danna was used by the geisha or similar servicepeople to refer to their male patrons or customers of high status. It can also translate to ‘master’ just like shujin, but this sounds a little more intimate.

A more ‘textbook’ word for husband in Japanese is kikon dansei (既婚男性 / きこんだんせい). It means ‘married men’ and is used as a general term for ‘husbands’.

You may encounter this word in materials like books, news reports, or articles. Unlike the other words, this cannot be used when talking about your own husband or somebody else’s.

When a couple is married with children, the wife can refer to her husband as otousan (お父さん / おとうさん). It is common to hear this from parents who converse in front of their children, or to simply talk about dad to the kids. Otousan can also be used to refer to your husband in the third person to somebody else.

Similarly, the spouse can refer to their husband as papa (パパ), a loan word for ‘dad’ familiar to everyone.

Anata (あなた) means ‘you’, but when you use this to call your husband, it conveys an affectionate nuance. The best way to interpret it is ‘dear’ or ’honey’. Anata is informal language, but intimate.

Some couples shorten it to anta, too. In a non-marriage context, anata is considered a slightly rude way of saying ‘you’. However, it has become a familiar language between married couples. Another example of affectionate words that couples use for each other is daarin (ダーリン), or ‘darling’ in English.

This Japanese word for husband also applies to other family members. Uchi no hito (うちの人 / うちのひと) is a gender-neutral term but is typically used by women to refer to their husbands. It is more suitable for informal settings. Sometimes, this can also be an endearment meaning ‘my person’.

Tsureai (連れ合い / つれあい) can be applied to either husband or wife. This word is not as common as otto, shujin or danna, but it is becoming more and more popular among younger couples who prefer using gender-neutral terms to refer to their spouse. You may use the polite otsureai (お連れ合い) or even shorten it to a less formal tsure (連れ)

The word consists of tsureru (連れる) which means ‘take (someone) along’ or ‘join, and au (合う), meaning ‘to come together’. Cute, right?

Here, we have yet another gender-neutral word for husband that is slowly gaining popularity: paatonaa (パートナー). It is always written in katakana because it is a loan word from English. To use it in formal situations, it is better to use paatonaa-sama (パートナー様). Just keep in mind that this word can seem unusual, especially to older generations.

A husband or groom can be called muko (婿 / むこ). It can also be used to refer to one’s son-in-law.

This Japanese word doesn’t just mean husband. Muko is typically used in situations where the husband takes the surname of his wife or spouse. If there are no living male heirs in a family, this type of practice may be done. Mukoyoushi (婿養子 / むこようし) literally means ‘adopted son-in-law’.

Another word to use when referring to your child’s husband or anyone’s son-in-law is giri no musuko (義理の息子 / ぎりのむすこ). This term is used in polite conversations with anyone outside your family. Normally, people use the son-in-law’s given name when addressing them directly.