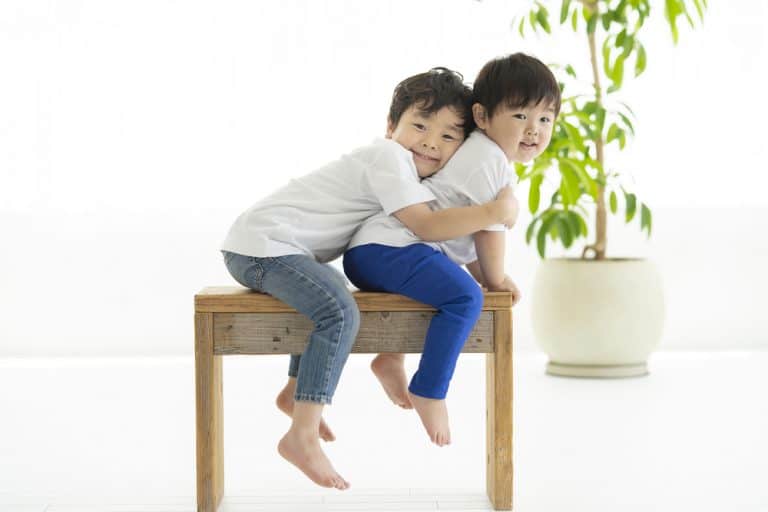 Team Japanese uses affiliate links. That means that if you purchase something through a link on this site, we may earn a commission (at no extra cost to you).
50 shares
LIMITED TIME OFFER!

Unlike the English language, there is no single word for ‘brother’ in Japanese. In fact, it is hard to separate the importance of age and hierarchy in the family in learning about family members. Ani (兄 / あに) is the word for ‘older brother’ while otouto (弟 / おとうと) means ‘younger brother’.

The words for ‘brother’ may vary depending on who you are speaking to. It is also important to consider polite and respectful language when addressing family members – whether you are talking about your own or somebody else’s.

Let us look at the different Japanese words for brother!

Oniisan (お兄さん / おにいさん) is one of the popular, polite ways to say big brother in Japanese, although it is often used in two specific situations: when speaking to your older brother and when talking about somebody else’s older brother.

Speaking directly to your older brother

Talking about somebody else’s older brother

An important cultural difference to note is that younger siblings typically call their older brothers oniisan and not by their given name. This is why there are many variations of the word such as niisan (兄さん / にいさん), oniichan (お兄ちゃん / おにいちゃん), and niichan (兄ちゃん / にいちゃん).

Parents often say oniichan when speaking to their eldest son. This way, they can set an example for their younger children so they can learn to treat their big brothers with respect. Oniichan is a more affectionate variation used by children up to the age of ten. This can be shortened to niichan.

We also have oniisama (お兄様 / おにいさま), which is reserved for very formal occasions or written correspondences. The suffix -sama (～様 / ～さま) adds the meaning of ‘Mr.’ or ‘Ms.’ when added to a name or noun.

Outside of the family, oniisan can also be used to refer to young men in general, especially if you don’t really know them personally. For example, the title of the popular comedy anime and manga ‘Saint Young Men’ or Sei Oniisan (聖お兄さん / せいおにいさん) refers to the main characters Jesus and Buddha as young men, because they go on daily adventures living as ordinary… well, young men!

This is used when talking about your big brother to people who are not part of the family. Ani (兄 / あに) is also the standard word for older brother in Japanese and consists of the respective kanji.

Ani can be used in both casual and formal conversations, either among peers or superiors. Although oniisan is more polite, ani still carries respect. Some people might refer to brother-like figures by another variation, aniki (兄貴 / あにき) which will be discussed later.

Otouto (弟 / おとうと) is the only word for little brother in Japanese. This is used when talking about your younger brother to somebody else.

Again, because of the hierarchy that exists even among family members, older siblings and parents do not refer to younger brothers as otouto. Rather, they call them by their given name.

However, it is proper and more polite to use otoutosan (弟さん / おとうとさん) when talking about somebody else’s younger brother. It might be alright to use otouto if you are talking with very close friends, but the safest route for such situations is to use otoutosan.

An interesting fact about the kanji 弟 is that it also stands for ‘faithful service to elders’. This denotes the importance of filial piety, a concept derived from Confucianism that practices obedience and service to family – especially to parents and elders. Even in Japanese society, children are expected to care for their parents when they grow older.

Kyoudai (兄弟 / きょうだい) is the Japanese word for siblings or ‘brothers and/or sisters’. It implies that somebody has more than one brother or sister. The word kyoudai can be used in any type of conversation with individuals other than family.

You might have noticed that the kanji for kyoudai consists of the characters for ani (兄) and otouto (弟). It used to mean ‘brothers’, but as time passed, its meaning evolved to apply to siblings, regardless of gender.

Meanwhile, the more feminine word shimai (姉妹 / しまい) exists for ‘sisters’. This is made up of the characters ane (姉 / あね) for older sister and imouto (妹 / いもうと) for younger sister.

Unlike the rest of the words on this list, ani ue (兄上 / あにうえ) is not commonly heard nor used nowadays, except for period dramas or historical fiction! This word translates to ‘honorable older brother’.

Ani ue was used in noble households and samurai families up until the Meiji period ended. Ue (上 / うえ) means ‘above’ or ‘up’, meaning that the person is of higher status than the speaker. While it is considered outdated, fans of samurai movies and stories about older Japanese periods may find this word interesting.

The word aniki (兄貴 / あにき) can be used when casually speaking with an older brother or a brother-like figure, such as a senior at work or among your peers. Though aniki used to be an honorific word used by the samurai, as time passed by, it became part of the more laid-back language today.

Finally, when talking about extended family, brothers-in-law are referred to as giri no ani (義理の兄 / ぎりのあに) or giri no otouto (義理の弟 / ぎりのおとうと) depending if they are older or younger than the speaker. These words are used when talking about your in-laws rather than when you are speaking to them directly.

The Japanese word for brothers-in-law comes in different versions, although these might not be used often:

Giri no means ‘in-law’, but it can also apply to step brothers. Though Japan doesn’t have a single word for step brother, the word ibokyoudai (異母兄弟 / いぼきょうだい) exists to refer to brothers from different mothers, and ifukyoudai (異父兄弟 / いふきょうだい) for those with different fathers.

So there you have a run down of the most common words for brother in Japanese! Yes, it is more complicated than in English, but that’s part of what makes Japanese such a rich language!

Some of these words are not so common, for example you might not hear ani ue outside of historical dramas. But if you can master all these words, it will help you become a master of Japanese!

Here are some more Japanese family words you need to know: