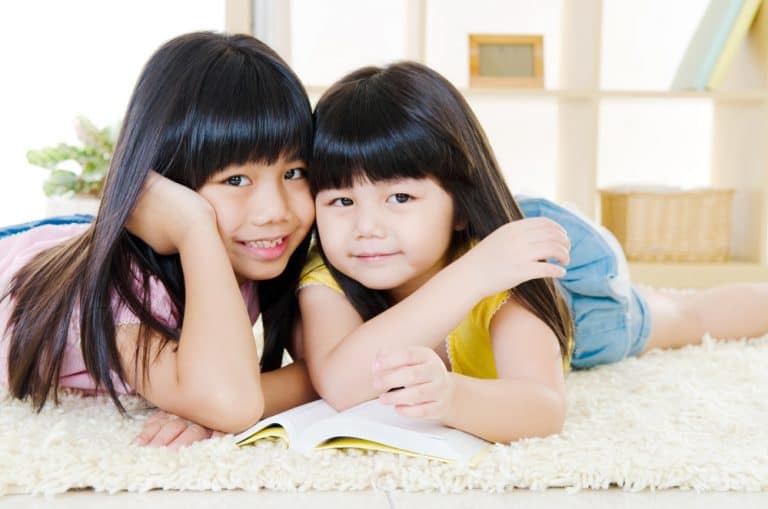 Team Japanese uses affiliate links. That means that if you purchase something through a link on this site, we may earn a commission (at no extra cost to you).
50 shares
LIMITED TIME OFFER!

Learning about how to refer to family members can be a little tricky in Japanese! Generally, there are two standard Japanese words for sister: ane (姉 / あね) for ‘older sister’ and imouto (妹 / いもうと) for ‘younger sister’.

During the period before the Meiji era, people used a different version to refer to sisters. Talking about sisters-in-law is also a little tricky, but with the help of the information below, you’ll get the hang of it.

Here are 7 different ways to say sister in Japanese!

This Japanese word for sister is one of the most widely-used terms. Oneesan is used when speaking directly to your own older sister or somebody else’s. This is also the proper word to use when talking about anyone’s older sister, including your own.

Speaking directly to your older sister

Even among family members, hierarchy is an important thing in Japan. If you are a younger sibling, it is uncommon to refer to older sisters by their given name, unlike in the West.

Little children typically address their older sisters by oneechan (お姉ちゃん / おねえちゃん) and neechan (姉ちゃん / ねえちゃん) up until they turn 10 years old or so. (-chan is a more affectionate Japanese honorific than the standard -san.) When younger siblings grow older, they usually switch to oneesan.

Oneesama (お姉様 / おねえさま) is a very polite way to address someone. This can be used in formal conferences or celebrations to talk about somebody’s older sister.

Additionally, oneesan can also be used with female outsiders or people who are not part of your family. Some individuals use this word to refer to young ladies, such as the friendly female guard at the train station or a waitress.

Older sister (your own)

Ane (姉 / あね)is a Japanese word used when talking about your own older sister to other people, like friends or superiors. It is a polite form typically used by adults. Ane can also be seen in written correspondences or articles referring to older sisters in general.

Younger sister (your own)

The standard Japanese word for younger or little sister is imouto (妹 / いもうと). Normally, you would use this when talking about your own younger sister. This can be used around friends, peers, or anybody outside your family.

In Japan, younger siblings are usually addressed by their names when speaking directly to them. Because of this, it is unnecessary to call your little sister imouto, unlike the case with oneesan for older sisters or oniisan for older brothers.

Meanwhile, imoutosan (妹さん / いもうとさん) is used when speaking about somebody else’s younger sister. The suffix -san is added to make it more polite. It is rude to refer to an acquaintance’s younger sister by imouto only.

Talking about your younger sister

Talking about somebody else’s younger sister

Although kyoudai (兄弟 / きょうだい) is a commonly used word meaning ‘siblings’ in Japanese, shimai (姉妹 / しまい) is substantially feminine. In fact, if you’ve got a sharp eye, you might have already noticed that it is made up of the kanji for older sister (姉) and younger sister (妹)!

Shimai can be used when talking about your own or anybody’s sisters, whether they are older or younger. Meanwhile, kyoudai can be used regardless of gender, even if it is made up of the kanji for older brother (兄) and younger brother (弟).

This is an archaic Japanese word that literally translates to ‘honorable older sister’. This is uncommon in modern language, but you might have heard it in historical dramas or movies.

Ane ue (姉上 / あねうえ) is considered as an honorific or respectful term. It was used by the samurai and noble families in Japan before the Meiji era. Ue (上) means ‘above’ or ‘up’, implying that the older sister is of higher status than the speaker or is highly respected.

Compared to most of the words on this list, aneki (姉貴 / あねき) is more informal. This is typically used by young men when speaking directly to or talking about their older sisters to peers. This can also refer to older female friends or ladies who are not blood-related to the speaker.

Aneki used to be an honorific word like ane ue, but unlike the latter, it found its way into modern day-to-day speech but in a more casual form. The ki (貴 / き) in aneki means ‘precious’, ‘value’, or ‘honor’.

Giri no ane/Giri no imouto

In Japanese, in-laws are identified with the proper prefix giri no (義理の / ぎりの), which means ‘in-law’ or ‘relation by marriage’. Sisters-in-law, are called giri no ane (義理の姉) or giri no imouto (義理の妹).

Giri no ane or imouto is used when talking about a sister-in-law rather than when directly speaking to them. Japanese relatives normally address them by given name and attaching –neesan instead (ex. Michiko-neesan)

There are different variations of the Japanese word for sister-in-law, such as:

Another word, kojuuto (小姑 / こじゅうと) exists, however, it is often used in negative situations. While it literally translates to ‘little mother-in-law’, kojuuto is used when talking about irritating younger sister/s-in-law who display a bad attitude or have busybody tendencies.

Finally, giri no can also mean ‘step’ as in ‘stepsister’. The Japanese have a conservative stance on divorce, hence, there is no exact word for step siblings. You can refer to your sister, however, with iboshimai (異母姉妹 / いぼしまい) if you have different mothers or ifushimai (異父姉妹 / いふしまい) for different fathers.

As you can see, talking about sisters in Japanese is a little more complicated than in English because you have to think about the relative age of the sister, as well as the formality level of the conversation! We hope this post has helped to clear up some of your questions about the words for sister in Japanese.